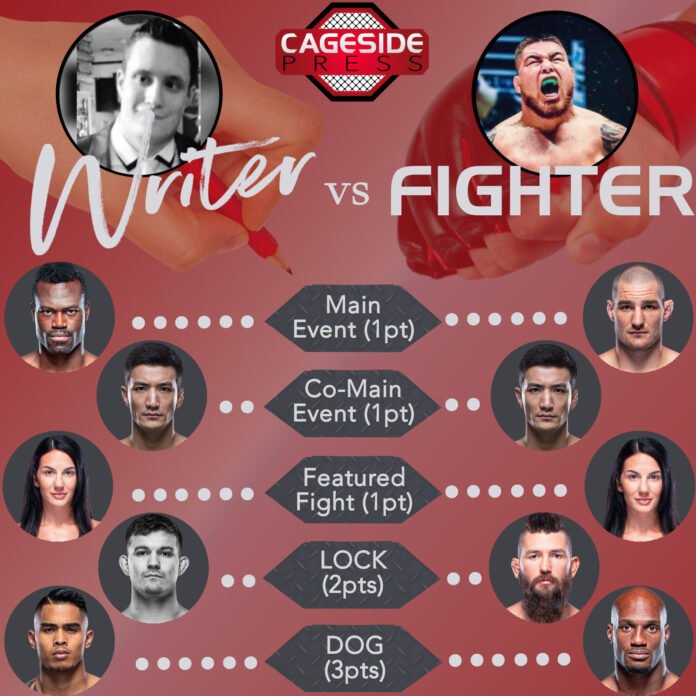 It’s time for another battle for pick supremacy. We pit those who write about face punch with those who do the punching to see who knows more about what will go down at UFC Vegas 32. Here’s how each week has gone so far:

Carlos Mota makes it two wins in a row for the fighters. The gap has begun to close with the win streak and the score is now 11-8. With still 5 months to go, the fighters have plenty of time to catch up to the pundits. It all starts with the picks at UFC Vegas 33 though.

On this week’s edition, Cageside Press’ newest addition James Rees takes the helm for the writers. For the fighters, Roque Martinez will look to keep the ball rolling. Here’s how their picks look. 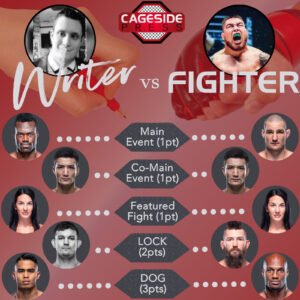 The picks for the top of the card are all pretty close. Both Martinez and Rees are liking Kyung Ho Kang to top the veteran Rani Yahya. They both also like Cheyanne Buys to get in the win column against Gloria de Paula. The main event is the only spot where these two have a difference. The UFC veteran will be taking the favorite Sean Strickland and the writer will be riding with Uriah Hall.

Of course, the top of the card isn’t the only place a winner can be crowned. There is quite a bit of difference in the locks and dogs as well. For a lock, Martinez is going with veteran Bryan Barberena, while Rees will ride with Orion Cosce. Martinez likes Jared Gooden on short notice to win as his dog. Meanwhile, Rees will hope another short notice replacement in Kai Kamaka gets the ‘W’.

May the best writer/fighter win! Check back here to see the results following the conclusion of UFC Vegas 33.