UFC 257 looms large, as the promotion’s first PPV event of the calendar year arrives Saturday. Topped by Dustin Poirier vs. Conor McGregor 2, a lot of eyeballs will be on the event. A lot of bets will be placed. Picks made.

Including those by one pro fighter, and one writer, in a head-to-head competition we call Writer vs. Fighter.

Writer vs. Figther is just what it sounds like. Each event (we’re three for three on the consistency front so far!), we’ll pit one of our writers against a professional MMA fighter, in a series of five fight picks from that week’s card.

For UFC 257, we have our own MMA prospect guru, Shawn Bitter, up against UFC light heavyweight Mike Rodriguez. Mike’s nickname might be “Slow,” but he’s got some fast hands with nine KO/TKO finishes in his career. Of course, picking fights isn’t exactly a science, and so far in this series, the writers are up 2-0. We’ll know soon if Rodriguez can win one back for the fighters.

So who did Shawn and Mike side with at UFC 257? 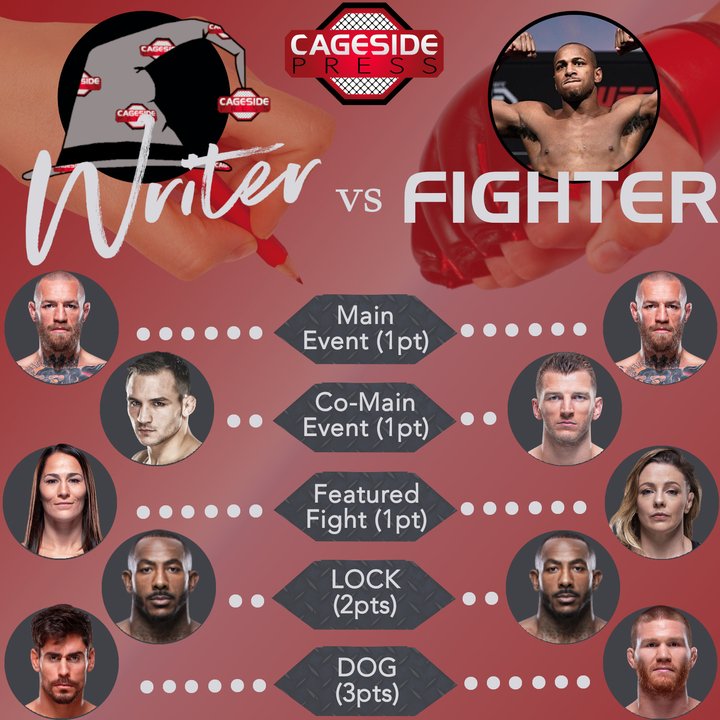 Neither man was willing to bet against Conor McGregor in this one. Although Dustin Poirier is much improved, it’s hard to blame them, given McGregor’s track record. Things get a little more interesting as we go down the card. Shawn is siding with incoming Bellator star Michael Chandler in the co-main event, while Mike Rodriguez is sticking with the home team, UFC standout Dan Hooker.

They’re split on the featured fight as well. Shawn is leaning toward Jessica Eye, while Mike has Scotland’s Joanne Calderwood in that flyweight affair. The lock is a wash, as both have sided with Khalil Rountree Jr. However, the underdog spot gets really interesting: Shawn has chosen to run with Antonio Carlos Junior, while Mike selected Matt Frevola. These picks were made prior to this morning’s commotion, which saw Frevola lose one opponent (Ottman Azaitar) and pick up another (Arman Tsarukyan, who happened to miss weight).

Results: In a first for Writer vs. Fighter, we have a tie! McGregor lost, but Shawn picked Michael Chandler to win his debut. However, Mike took Joanne Calderwood in the featured fight, leaving them dead even. Khalil Rountree Jr. didn’t turn out to be a lock after all, and both Antonio Carlos Junior and Matt Frevola came up short. 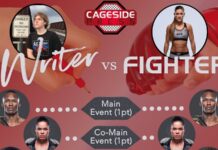 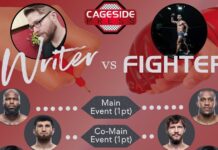 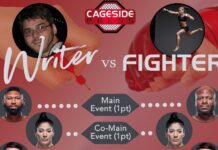