Writer vs Fighter is back for another week of showdowns between those who can fight and those who choose to write about it. Last week’s figurative face-off saw former UFC featherweight Austin Arnett edge out our own Heath Harshman to even the score.

Here’s how things have gone this year:

This week, I (Daniel Vreeland) will be stepping up for the writers to try to snag the lead back. My worthy adversary? UFC strawweight Sam Hughes, who will try to give the fighters their first lead of the year. Let’s see where we differed. 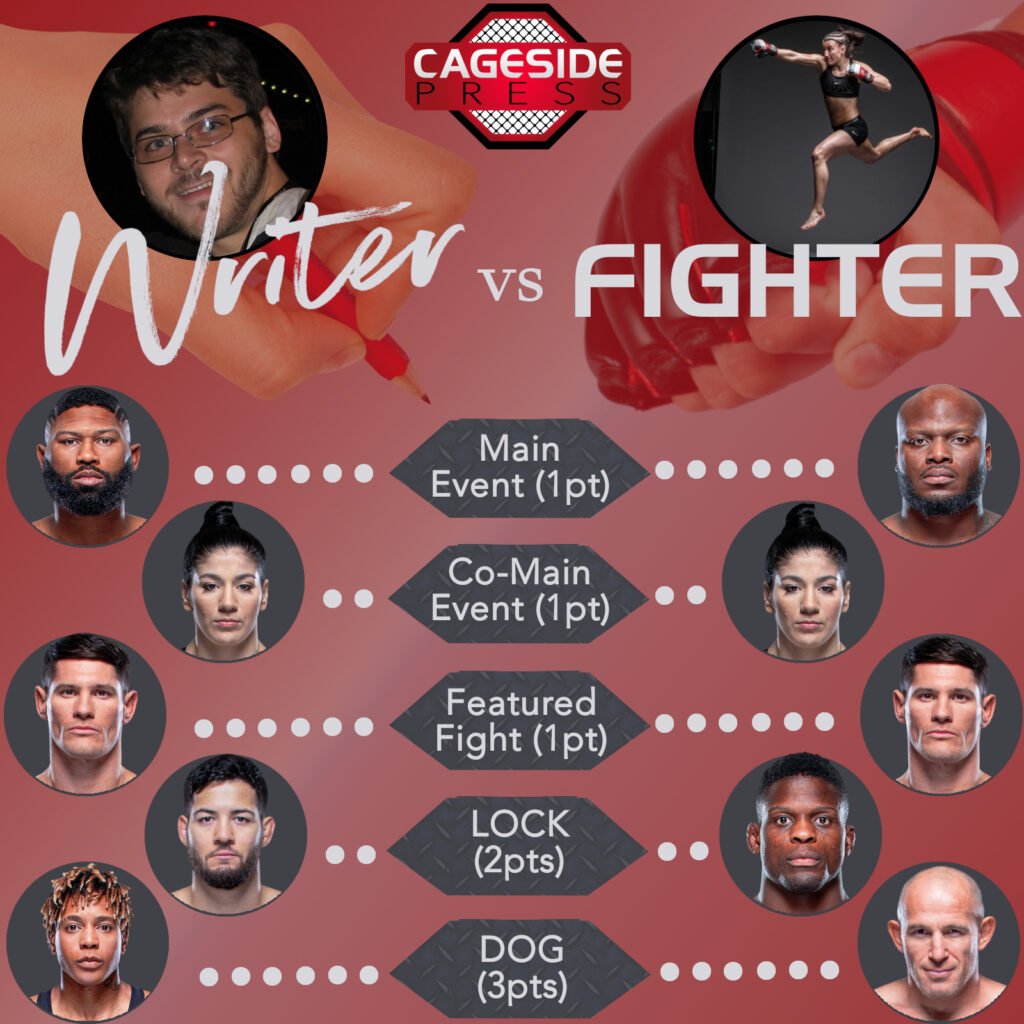 The top three fights are virtually identical with Hughes and I both agreeing that Ketlen Vieira and Charles Rosa will get it done in their respective bouts. The difference lies with the main event, where ‘Sampage’ feels that Derrick Lewis is prime to complete the upset while I’m sticking with the chalk pick at the top.

Of course, we can’t pick chalk all the way through, which is why we have the underdog pick. Hughes decided to go with heavyweight Alexei Oleinik to take out Chris Daukaus – and even offered that she expects a d’arce choke to get the job done. I’ll be riding with flyweight Shana Dobson, who I think has a great chance to beat another young up-and-comer in Casey O’Neill.

Finally, we have the locks, which is where things get particularly interesting. We both sided with different fighters in the same fight. Hughes will be taking Phil Hawes, whereas I’ll have Nassourdine Imavov – opposite sides of the same middleweight tilt.

Results: It wasn’t a good night for the writers. Sam made the right pick with Lewis, while both writer and fighter missed out on the Minner-Rosa and Kunitskaya-Vieira fight. Sam Hughes came through again with Phil Hawes, for a total of three points. Both Sam and Daniel saw their underdog pick fall through, meanwhile. Sam Hughes wins this one 3-0!

UFC Vegas 19: Andrei Arlovski Says He Has Advantage in “Age and Gray Hair”...

UFC Vegas 19’s Darrick Minner on Opponent Rosa: “I Went Through the Grinder to...