Jay Anderson Jay's work has appeared on Cageside Press, The MMA Corner, What Culture, Cage Pages, MMA News, Today's Knockout, and Fox Sports (via Fansided). He holds an Honours Bachelor of Arts degree in English from the University of Guelph, and a Certificate in Leadership Skills from Humber College.

Gabriel Gonzalez Lead Correspondent - Besides Cageside Press, Gabriel Gonzalez is also the lead reporter for MMA Uncaged and is one of the hosts of the "MMA Daily" podcast. @DoubleGonTV on all platforms.

Alex Behunin Alex has been an avid fan of MMA since 2005. He watched The Ultimate Fighter and was hooked ever since. His work has been featured on BloodyCanvas, MMAProspects, MyMMANews, The Sundial, as well as his own 'Humanizing Athletes' series.
Follow him on Twitter and Instagram @Alexbehunin.

Dan Doherty Danny is a 2017 graduate of Ithaca College's Sport Media program. He has been an avid fan of mixed martial arts since watching the UFC’s 100 Greatest Fights special on Spike TV back in 2009. Shortly following UFC 100, Danny’s Saturdays, and most of his free time, became dedicated to the Ultimate Fighting Championship. Currently, Danny is a reporter and play-by-play voice for ESPN Radio in Ithaca, New York. Along with fellow Cageside Press writer Heath Harshman, Danny hosts a weekly MMA podcast, Throwin' Elbows MMA.

Shawn Bitter I'm 25-years old and live in Harlan, Kentucky but born in Cincinnati, Ohio. I'm a die hard MMA fan from the UFC to the smaller promotions like LFA, CFFC, Invicta and so many more. My life consists of work, my wife, MMA, and writing.

Josh Evanoff 19 year old with a passion for the sport of Mixed Martial Arts. Have written about MMA since 2017, works have appeared on Fox Sports, Cage Pages, Fansided, as well as CagesidePress. One half of the 'Courtside Soundoff' Podcast on Spotify, Podbean, YouTube, and iTunes. Can follow all works @JoshEvanoff on Twitter.

Daniel Vreeland Daniel "Gumby" Vreeland has been an MMA writer for over a decade. His credits include FloCombat, Fight! Magazine, The UG and MMA-Manifesto. In addition to writing, "Gumby" hosts the Top Turtle Podcast and is a member of the UFC's ranking panel. When he's not transcribing hours of himself talking, he is working on his jiu jitsu brown belt and getting taken down by his two sons.

Mike Straus Mike Straus @AKAstraus21 is a credentialed MMA journalist and a member of the MMAJA. He has been a fan of the sport since its inception and has been covering the sport professionally for three years. In the past, he has produced content for Fansided's Cagepages, mma-media.com, and Combatpress.com. He currently contributes for MyMMANews.com, he is a staff writer for Cagesidepress.com, and LowKickMMA.com. He most recently began writing for BJPenn.com.

Bryson Hester Bryson Hester is a MMA writer and who enjoys the technical and skill aspect of the sport. Writing about weight cutting interesting match ups, concepts, and techniques is what he likes to focus on. He has been a mixed martial arts fan since True Life I'm a Mixed Martial Arts Fighter came out in 2008. His interest increased with an amateur combat sports career of his own and a passion for fitness.

Heath Harshman Born and raised in the Northwest, Heath fills his time with writing, friends, music, and sports. Just a jobber trying to get over.

Mike McClory Canadian born and raised, MMA fan since the days of VHS tape, Founder of Cageside Press and lover of all things combat sports.

Justin Gibbons It’s a great feeling knowing that my words can inspire or motivate or even start a conversation about MMA/Combat Sports. I promise that every word that I type, every podcast I do, and any interview I am lucky to get will be done with 100% passion and love for the sport. To everyone who reads the articles I put out, I can’t thank you enough – whether you agree or disagree, the time you took to read my work means a lot – so thank you!

Paarth Pande Paarth Pande is a combat sports fan. He got involved in combat sports after watching a WWE event at a television store and then soon took up writing about MMA as he was looking for a platform to express his opinions. Paarth also contributes to Pro MMA Now.

Dylan Bowker I've been enamored with combat sports for as long as I can remember. I've hosted MMA talk shows Lights Out and Pure Fight Radio with featured guests like Jens Pulver, Roy Nelson, Miesha Tate, Mark Coleman, and more. I've been an MMA broadcaster for XFFC as well as BTC and have done play by play commentary on live pay per view on GFL as well as FITE TV. I've provided written, audio, and video content covering some of the biggest MMA promotions like Rumble in the Cage, Unified MMA, and King of the Cage. I've worked as a sports entertainment personality for over five years and given play-by-play or featured promotions of KSW, ONE Championship, TKO, and Invicta FC. My work can be found in the USA Today Sports affiliate MMA Torch, Cageside Press, MMA Sucka, My MMA News, Sports Betting Dime and Liberty Multimedia.

Doug Murray Doug is a freelance sports writer, who has covered most major sports, but specializes in mixed martial arts coverage on a variety of websites.

James Lynch Full-time freelance MMA Journalist with over 10+ years in the industry. Follow me on Twitter @LynchOnSports

Chris Prawdzik Writer at Cageside Press, Chris has been covering the sport of mixed martial arts on and off for several years. He has always been an MMA fanatic and enjoys spending time with his family, playing video games and anything horror related.

Jamie Theodosi Born and raised in Birmingham, United Kingdom. Graduate from Birmingham City University where I studied Sports Journalism. Love all levels of MMA, from Battle Arena to UFC. Follow me on Twitter, @JamieTheoMMA

James Rees James has been hooked on MMA since Enson Inoue vs Heath Herring at Pride 12 back in 2000. His work to date has featured at Overtime Heroics.
Big fan of a muay Thai and Kickboxing with ties to the Dutch fight scene James looks forward to sharing his love with you all.
Check out his twitter @JamesRees83 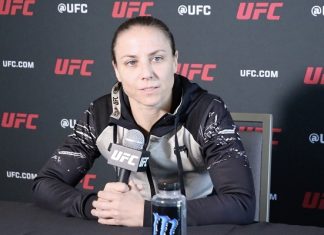 Gabriel Gonzalez - August 10, 2022
San Diego, CA — While wife Amanda Nunes has left American Top Team to launch her own gym, Nina Nunes is sticking with the...