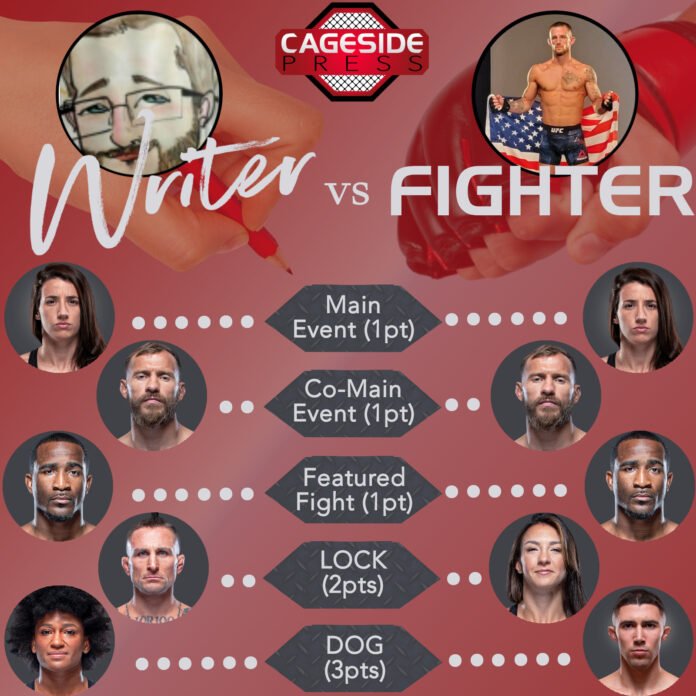 It’s that time again! Time for Writer vs Fighter where we get to see those who punch faces for a living go up against those who write about it in a battle for pick supremacy.

And with the win from Hester last week, the Writers have drawn their lead to 7-5 with a single draw. They’ll look for one of their biggest leads yet with a win this week.

On this week’s edition, Justin Gibbons looks to add to the lead for the Writers. Standing in his way is one of the hottest prospects in the UFC’s hottest division, Nate Maness. Let’s see what their picks look like. 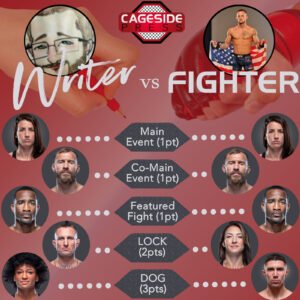 As you can see, no ground is going to be made up during the top 3 fights of the night. Each of our combatants agree entirely at the top of the card. Both like Marina Rodriguez in her bout with Michelle Waterson. Both also think Cowboy turns back the clock a bit and holds off Alex Morono. And neither is all that worried about Geoff Neal in his bout with Neil Magny.

Where the real decision will likely be made is a strawweight bout between Angela Hill and Amanda Ribas. Maness has locked Ribas in as his most sure pick, whereas Gibbons is going for the underdog Hill in his underdog slot. There will be a 5pt swing in that fight alone. Of course, some ground can be made up with the other picks. Maness will ride with Mike Trizano as his underdog and Gibbons with Gregor Gillespie as his lock.

May the best writer/fighter win! We’ll have the results up after the conclusion of UFC Vegas 26!