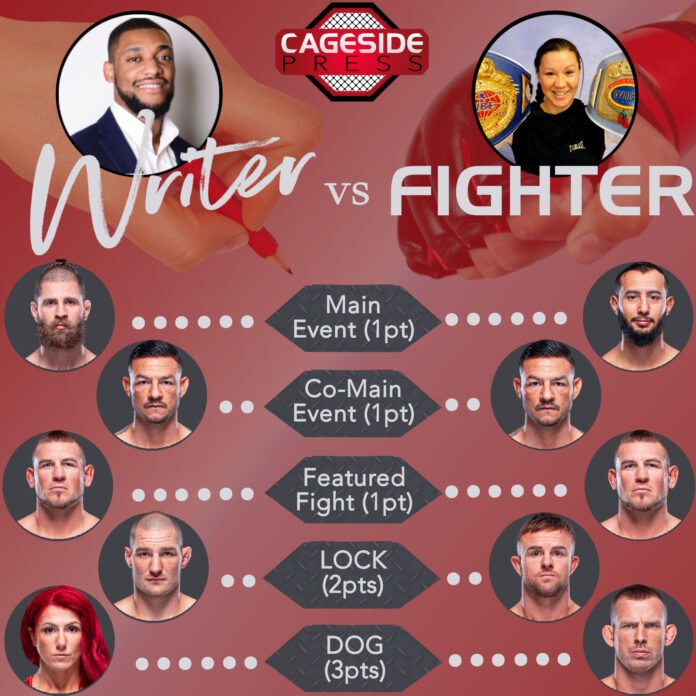 The battle for pick supremacy is raging on with another round of writer vs fighter. Will the Cageside Press staff flex their MMA knowledge further? Or do professional fighters have better prognosticating powers?

With the narrow win by Dakota Bush this past weekend, the fighters have moved within just one win. The total now stands at 6-5 with a draw.

On this week’s edition, Bellator’s #2 featherweight Arlene Blencowe drops her picks for UFC Vegas 25. She’ll be facing off with Cageside Press stalwart Bryson Hester. Let’s see what their picks look like. 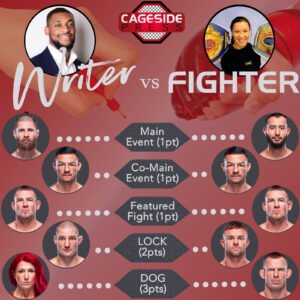 The main card picks are almost identical with both Blencowe and Hester taking Cub Swanson and Dustin Jacoby. The only real difference in that portion is the main event. The fighter will be riding with Dom Reyes, who is a slight underdog in the main even. The writer on the other hand is going with the Czech fighter.

The showdown very well could be decided with an exciting middleweight tilt between Sean Strickland and Krzysztof Jotko. Bryson Hester has locked Strickland in as his sure thing for this week. Blencowe on the other hand, had Jotko as her dog. Of course, more ground could be made up with Hester’s dog, which will be Randa Markos, or Blencowe’s lock, which is Cody Stamann.

May the best writer/fighter win! We’ll have the results up after the conclusion of UFC Vegas 25!