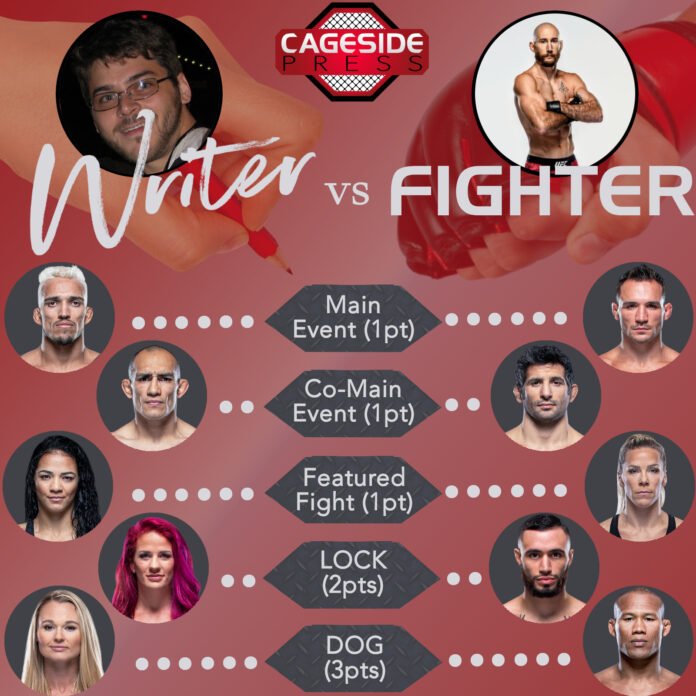 That’s right, it’s time for another edition of everybody’s favorite pick showdown. Writer vs Fighter gives fighters a chance to strike back against those who write about them – in a figurative manner of course.

With the win from Maness last week, the fighter have once again inched within one event from tying the score. It now stands at 7-6 with a draw.

On this week’s edition, yours truly, Gumby Vreeland is getting back in there. After getting whipped by Sam Hughes earlier in the year, I’m taking another stab against Kyle “Monster” Nelson. Hopefully, he goes a tad easier on me. Here’s how the picks look: 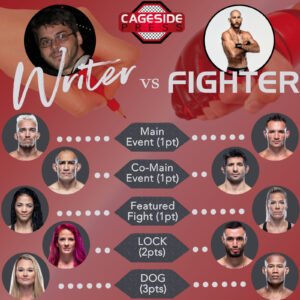 The main card could not look more different for the two of us. We disagreed across the board. While I like the underdogs in two of the earlier matchups, in Tony Ferguson and Viviane Araujo, Nelson will be riding with the favorites in those. The script gets flipped in the main event, where he dug in for the underdog and former Bellator staple Michael Chandler. I stuck with the Brazilian favorite.

There isn’t any agreement on locks or dogs either, which could make this a wild set of results. I doubled down on the ladies side this weekend with my lock being Gina Mazany and my underdog being Andrea Lee. For his picks, he went with Shane Burgos as his lock in his battle with Edson Barboza. Then for his underdog, he expects Jacare to turn back the clock one more time.

May the best writer/fighter win! We’ll have the results up after the conclusion of UFC 262!