The UFC is back with a quick turnaround, hosting UFC Fight Island 8 on a Wednesday, just days out from their 2020 debut. And Writer vs. Fighter is back as well!

If you missed the concept the first time around, it’s pretty simple. We’ve opened up a new series: Writer vs. Fighter. You probably knew that much already, since you’re reading this. And it’s just what it sounds like. Each event (we promise we’ll try to stay consistent), we’ll pit one of our writers against a professional MMA fighter, in a series of five fight picks from that week’s card.

How did it go the first time around? Our own Joe McDonagh came out on top against fellow New England native Randy Costa. Which will likely be Joe’s only win over an MMA fighter, ever.

This week, we’ve got Doug Murray lined up against Bryan “Bam Bam” Barberena, who’s ready to lay the smack down outside the cage for a change.

Here’s how it works: writer and fighter must pick the winner of the main event, co-main event, and featured main card bout. A correct pick will earn one point. Both must then pick a “lock” — the fighter they are most sure will win their fight — from the entire card. That’s two points. The “dog” comes next, and a correct underdog pick earns three points.

That’s it. Easy as pie. Five picks: Main, co-main, and featured fight winners, lock, and underdog. To the winner go the spoils. Not actual spoils, but bragging rights anyway. Maybe we’ll come up with a little trophy at the end of the year or something. But it’s all in good fun!

So who did Doug and Bryan go with this week? 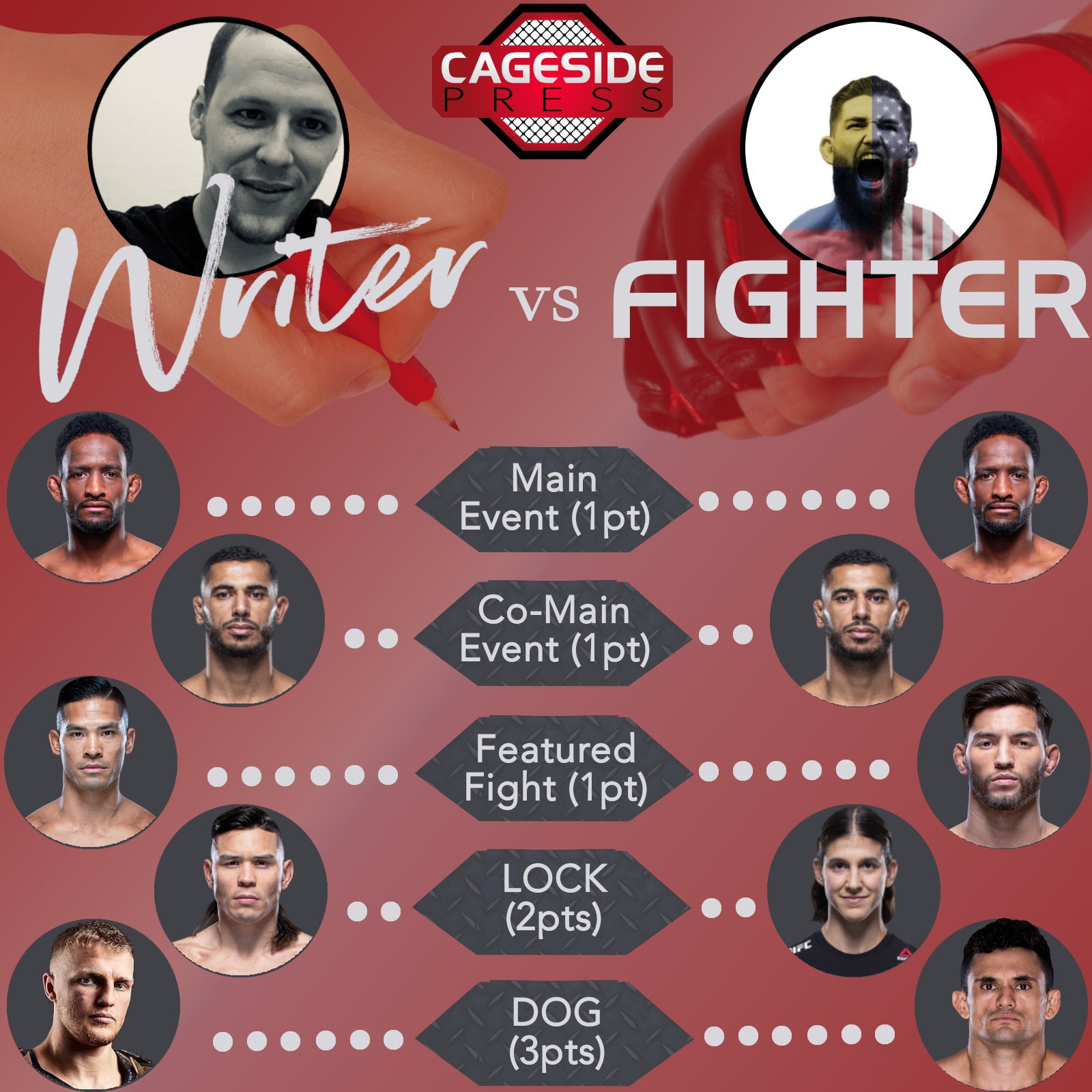 Both writer and figther are in agreement when it comes to the main and co-main events, with both Doug and Bryan siding with Neil Magny and Mounir Lazzez, over Michael Chiesa and Warlley Alves, respectively.

The featured fight is where it gets interesting. Doug has Tyson Nam, while Bryan is giving the nod to Matt Schnell. For a lock, Doug has Ricky Simon, who takes on newcomer Gaetano Pirrello. Bryan has Roxanne Modafferi, who fights Viviane Araujo, in the lock position.

Finally, for the most points on the board, Doug has Mason Jones as his underdog, while Bryan has selected Douglas Silva de Andrade.

We’ll have the results after the fights!

Results: Both underdogs came up short, but Doug’s lock, Ricky Simon, came through. Bryan picked the Nam vs. Schnell fight correctly, but with both his lock and the main/co-main losting, Doug takes it 2-1.

In the career series to date, the writers are up 2-0.