Khabib Nurmagomedov vs. Dustin Poirier were set for a showdown in the desert at UFC 242, as the UFC returned to Abu Dhabi for one of the biggest events of the year.

UFC 242 was set for a stunning main event, as ‘The Eagle’ landed in Abu Dhabi, tasked with taking out Dustin ‘Diamond’ Poirier to quash any dispute of his 155lb title. Poirier, the interim title holder, was facing the biggest challenge of his career. He was also the underdog, hoping to become the first man to defeat the Dagestani smashing machine.

In the co-main event, fan favorite Paul Felder was looking to avenge an earlier loss to Edson Barboza. Revenge might be a dish best served cold, but he’d be looking to pull it off in the heat of Abu Dhabi’s Yas Island, in an arena specially constructed for the PPV event.

Check below for full results from the card as they happen, with links to recaps of each bout! 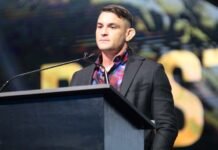 UFC: Dustin Poirier Feels “The Same Way” About A Lot of What Nick Diaz Said in ESPN Interview