After over two years away from the octagon, including a lengthy suspension for his involvement in the UFC 229 incident, Zubaira Tukhugov returned at UFC 242 in Abu Dhabi.

Zubaira Tukhugov returned from suspension at UFC 242, taking on England’s Lerone Murphy in a featherweight clash. Tukhugov had earned notoriety, and a lengthy suspension, after attacking Conor McGregor during the melee following UFC 229, where Tukhugov’s teammate Khabib Nurmagomedov submitted the former double-champ.

Murphy, for his part, was making his UFC debut, with a perfect 8-0 record backing him up.

Murphy attacked the lead leg of Tukhugov early. Tukhugov uncorked a right hand that Murphy avoided. Tukhugov seemed to have the right hand at the ready, and had soon clipped Murphy, who scrambled back up, but was in serious danger. Tukhugov landed blow after blow as Murphy worked back up. Ref Herb Dean took a good look but let the action continue. Murphy wound up back on the ground, as Tukhugov looked to pull his legs out from under him. Back to the fence, Murphy couldn’t do much, until he was finally able to post up and wall walk a little.

However, it was right back down, with Tukhugov in guard. Further from the fence this time, Tukhugov moved to half-guard. He wasn’t able to finish, but he was in control until a scramble at the bell.

Cageside Press scored the round 10-9 for Tukhugov.

Tukhugov fired off his right hand early in the second. The fists were flying early and often, with Murpy apparently recovered for the knockdown in the first. However, Tukhugov scored a takedown just over a minute in. Murphy had his back to the fence, and tried to defend with a guillotine. If nothing else, he nearly escaped, and later would make it back to his feet. Tukhugov continued to drive Murphy into the cage, but again Murphy locked up a choke. However, the end result was Tukhugov rolling free as the pair went back down.

Back on the feet, Murphy connected with an uppercut, and later hit home with an elbow off the break. He was beginning to find some momentum, which Tukhugov sensed, again shooting for takedown. He planted Murphy on his back, stalling the English fighter’s comeback.

Cageside Press scored the round 10-9 for Murphy

Between rounds, the doctor checked on Tukhugov, though the reason why was not clear. He was given the green light, and the pair squared off.

Murphy fired a couple of kicks; Tukhugov again went for a takedown, but was stuffed. Murphy put Tukhugov on his heels, so the Dagestani shot again, only to be stuffed again. Another takedown attempt had Murphy implementing a whizzer, trying desperately to keep the fight standing. Tukhugov was warned to keep working by Herb Dean, and eventually Murphy pulled free. Moments later, however, Tukhugov had him down, with two rounds remaining. Murphy, who could possibly have been down two rounds (and at least needed one more), needed to get off his back. Murphy gave up his back doing so, but Tukhugov was too tired to take advantage. Again, Zubaira was warned to keep working. Against the fence a moment later, he was warned a third time to keep working. He’d put Murphy on the mat one last time, and they’d head to the scorecards.

Cageside Press scored the round 10-9 for Tukhugov. 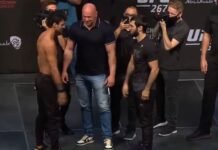 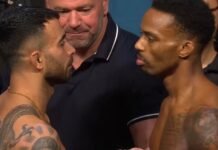