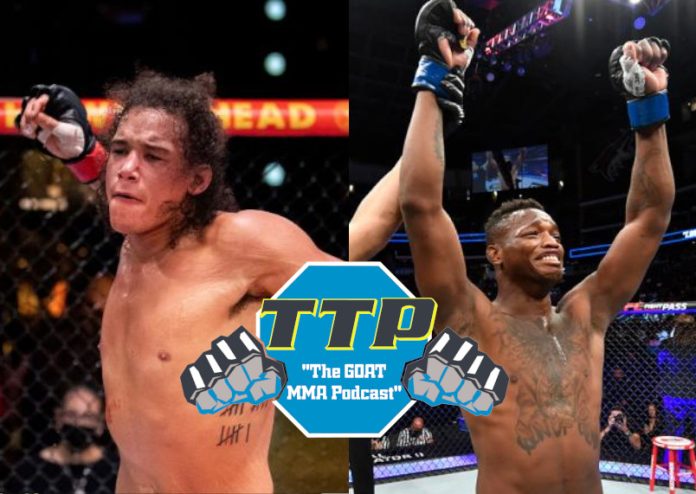 Kicking off this week’s edition of the Top Turtle MMA Podcast, Bryan Battle joins the show. He discusses the drastic change in his physical make up as he drops down to 170 pounds. The change is not even one he planned on doing, but as he got stronger following his fight with Tresean Gore, it just seemed like what made sense. Not only does he share how he came to the decision, but also he digs into his fight at UFC Vegas 59. After his first couple fights both being against guys from The Ultimate Fighter, he’s finally happy to be fighting outside the house.

The UFC has been on the road for a few weeks in a row, but they head back to their cozy home in the Apex for this Saturday. UFC Vegas 59 takes place there with a battle of heavy swingers at the top of the card. We’ll be breaking down Thiago Santos versus Jamahall Hill as well as a few other of our favorite fights on the main card. Plus, we’re giving you an underdog and a parlay to make your wallet fat. One of those might even include a fighter from The Ultimate Fighter finale. For this segment, odds via FanDuel Sportsbook.

Closing out this week’s episode of Top Turtle MMA Podcast is UFC lightweight Terrance McKinney. He discusses some of the mistakes that gave him his first UFC loss and just how crazy Drew Dober’s chin really is. He discusses making adjustments off of that fight and what he needs to do to get back in the win column. Plus, he shares his thoughts on UFC Vegas 59 opponent Erick Gonzalez and gives us a prediction for how the fight will end come this Saturday.