In this three-part feature, we’ll list prospects the UFC should bring in for season five. This will exclude prospects that have already been on the show, although there are a few that could very well be brought back. The goal here is to be realistic with the selections, so don’t expect too many left-field picks.

Now on to part two! If you missed it, here’s part one.

Edwards was supposed to fight on Dana White’s Contender Series back in 2019 but an injury forced him out of the bout. Since then he has earned two more wins including a victory against Contender Series veteran Lance Lawrence. Edwards has a good amount of experience and is at his peak at 31-years-old. The now-current HRMMA featherweight champion deserves another shot, no doubt.

Among all the many top Canadian prospects, Wessels’ name is brought up a lot. In her last fight, she beat a talented Jade Masson-Wong for the BFL title. That win and the performance put her as arguably the best female Canadian prospect at the moment. Wessels was supposed to fight last summer on the Contender Series but VISA issues held that back. Wessels is a name I expect to hear a lot this year. 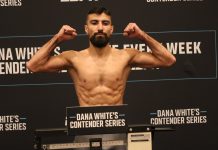