In this three-part feature, we’ll list prospects the UFC should bring in for season five. This will exclude prospects that have already been on the show, although there are a few that could very well be brought back. The goal here is to be realistic with the selections, so don’t expect too many left-field picks.

Kakharamonov should 100% be one of the first fighters the UFC contacts for the Contender Series this year. Kakharamonov just recently won the CFFC bantamweight title with an impressive knockout win. He’s only lost to Pipe Vargas and Umar Nurmagomedov, the latter of whom is a current UFC fighter. He’s fought for the likes of CFFC and PFL so he’s been on the bigger stages. Kakharamonov has exciting style and the personality that the show needs.

Askar’s sole loss was to the name above in Saidyokub Kakharamonov. It did happen in only 0:39 seconds, so there wasn’t really a chance to see how that fight would have played out. Askar was signed to the UFC this past February to fight Cody Stamann on short notice. The fight was called off because Askar failed his medicals, and his contract was pulled. It’s only fair to give Askar another chance by having him go through the Contender Series first, to see if he’s ready (and if he’s healthy). Askar is a really talented fighter and the extra experience will only help him. 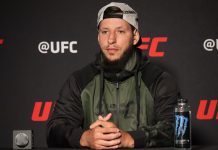