Farid had been scheduled to compete in July, but a weight miss by opponent Willian Souza scratched the fight at weigh-ins. Now, he gets the opportunity to join his brother in the UFC opposite LFA veteran Allan Begosso.

Our picks and predictions are in for Week 8 — read on!

Prediction: Farid Basharat was supposed to fight in week one of the Contender Series but his opponent Willian Souza pulled out after missing weight. Now he fights against a much better opponent in Allan Begosso.

Basharat is the brother of Javid Basharat who won a contract last season on the Contender Series. Farid just like his brother is super talented with a lot of upsides. The biggest threat Begosso brings is his knockout power and given Basharat holds his hands low there is a chance he gets caught.

Begosso is also a threat with his front head locks/guillotine. I do believe Basharat is defensively responsible enough to avoid leaving his neck out there. The footwork of Basharat should allow him to avoid the more stationary movement of Begosso. I believe the biggest opening for Basharat is to take this fight down. Although Begooso does have credible grappling his takedown defense is an issue.

If you mix in all the tools/weapons Basharat has, he should win this fight. I really like Begosso as a prospect but I think Basharat is the real deal. 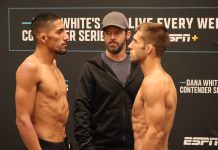