A pair of UFC lightweights will be looking to rebound and get back in the win column this April.

Luis Pena vs. Alexander Munoz will take place on April 17, 2021, at a UFC Fight Night. event. Munoz announced the fight via social media on Tuesday, with Pena later confirming the booking. Pena and Munoz were supposed to fight last February but was Munoz forced to pull out with an injury.

Alexander Munoz (6-1) is coming off the first loss of his professional career. Munoz came onto many fight fan’s radars when he defeated Nick Newell on season two of Dana White’s Contender Series. While he did not get a contract, he left somewhat of an impression. Munoz went back to the regional scene and picked up one more unanimous decision win. He was supposed to make his UFC debut last February, but an injury forced him to withdraw. He eventually made his debut at UFC Fight Night: Lewis vs. Oleinik in September against Nasrat Haqparast but ended up losing a unanimous decision.

Pena (8-3) once again has a new opponent and a new fight date. He was scheduled to face Drakkar Klose at UFC Vegas 19 but a positive COVID test on Klose’s end stopped the fight from happening. Pena is coming off a loss to Khama Worthy but before that defeated Steve Garcia in February — the fight that Munoz pulled out of.

No official location, venue, or broadcast details have been announced for the UFC’s April 17 Fight Night event. The following bouts have been reported for the card thus far: 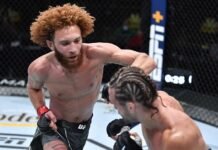