A pair of exciting UFC flyweight prospects will fight in May.

On Tuesday, Cageside Press confirmed with multiple sources close to the situation that Jimmy Flick and Francisco Figueiredo will face off at the UFC Fight Night event on May 8.

The Corner & The Casual podcast was first to report news of the bout.

Flick (16-5) is coming off one of the best submissions of 2020. He submitted Cody Durden with a flying triangle choke on the last UFC card of the year; not surprisingly, Flick was awarded a Performance of the Night bonus for his efforts. “The Brick” had a more active and positive 2020 than most. He won two flyweight titles, the Freestyle Cage Fighting belt in February, and then in 38 seconds, he captured the LFA flyweight title in July. Two months later, he won a contract on Dana White’s Contender Series by putting on a grappling clinic against Nate Smith. Quite a year for Mr. Flick.

The May 8 UFC Fight Night has no known location or venue, but the lineup now looks like this: 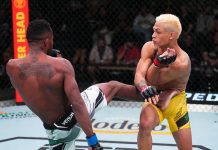