A pair of up-and-coming UFC middleweights will look to continue their win streaks this May.

First reported by MMA DNA, Tafon Nchukwi will fight Jun Yong Park at a yet-to-be-announced UFC Fight Night event on May 8. Cageside Press confirmed the bout with a source close to the situation, speaking on condition of anonymity as the promotion has not yet announced the bout.

Heading into the bout, Nchukwi (5-0) will look to continue where he left off in 2020. Nchukwi cashed in on season four of Dana White’s Contender Series by winning a UFC contract. He viciously knocked out Al Matavao in the second round. With only four fights to his name when he knocked Matavao, the UFC President signed Nchukwi stating that the fighter reminded him of a young Mike Tyson, and scared the sh*t out of him. Nchuwki dropped down to his current weight class, 185lbs, for his UFC debut. He defeated Jamie Pickett via unanimous decision; it was the first time he had seen the judge’s scorecards.

Park (12-4) is riding a two-fight win streak since losing his promotional debut in 2019. In his most recent win, he dominated John Phillips to win a near-flawless unanimous decision at UFC Fight Night: Ortega vs. The Korean Zombie on ‘Fight Island’ in October. Before his win over Phillips, The South Korean picked up his first octagon win in his home country over Marc-André Barriault.

The May 8 UFC Fight Night has no known location or venue, but the lineup now looks like this: 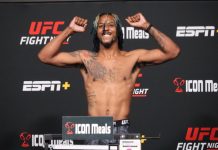