Rafael Alves appeared on last year’s season of Dana White’s Contender Seires and earned himself a UFC contract with his second round guillotine choke of Alejandro Flores. This fight took place in the featherweight division, and was only Rafael’s fifth time fighting at the weight since 2012. Alves is slated to make his debut at UFC Vegas 19 at featherweight, and the 30-year old Brazilian at 5’8″, with 68″ reach, is built like an absolute monster.

A former Titan FC Interim Lightweight Champion, Rafael has not faithfully fought in the featherweight division, and has only fought at 145lbs a handful of times within the past 9 to 10 years. 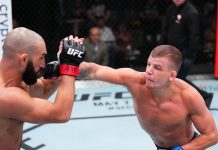