For UFC Vegas 15 we will take a look at some fighters with only a few (5 or less) fights in the UFC, rather than those fighters that are long-time UFC veterans with a bunch of finishes with the promotion.

Josh Parisian is a 31-year-old heavyweight with heavy hands and 10 KO/TKO finishes to his record, which is making his UFC debut on Saturday at UFC Vegas 15. Josh Parisian won a UFC contract this summer on Dana White’s Contender Series 2020 season with his first-round KO of Chad Johnson via punches from mount.

Parisian was on the Contender Series in 2018 and delivered a first-round spinning back fist to the 24-8 Greg Rebello, and instead of a contract, was given the opportunity to compete on The Ultimate Fighter Season 28. That didn’t work out, as Parisian lost to Michel Batista,  but after five wins finish wins in a row he got another shot at DWCS and the rest is history. Parisian has a good amount of MMA experience, taking into account amateur MMA experience, and he is a fighter that has had a chance at being in the UFC before and seen it pass him by, so he will really be looking to be making a statement on Saturday night at UFC Vegas 15. 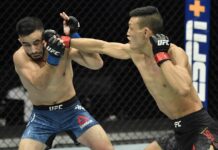