Undefeated lightweight champion Khabib Nurmagomedov stunned the world on Saturday when he announced his retirement after 29 career fights. The lightweight title is now up for grabs.

Given Nurmagomedov’s perfect run in MMA, the UFC should create a four-man tournament to crown their next lightweight champion. Nurmagomedov never took an easy path and was willing to fight anyone and everyone on his way to the top and fought the top contenders while he was atop the division.

Both fighters have fell to Nurmagomedov before with McGregor losing in 2018 and Poirier in 2019. Both fighters have rebounded since then. McGregor finished Donald Cerrone in 40 seconds 10 months ago while Poirier bounced back in June against Dan Hooker.

The two fought at UFC 178 in 2014 where McGregor won by TKO in the first round. Both fighters have changed since then and there is no doubt that both are wanting to regain a UFC title.

Following the loss to Nurmagomedov, Gaethje said in his octagon interview that he looks to return in 6-8 weeks. The UFC reportedly booked fights for January 16, January 30 and February 6. Those are reportedly the three non-PPV events the UFC has so far for 2021.

If Gaethje can have it his way, he will fight on and headline one of those three events in early 2021. As for his opponent, there are a couple of options. Some might call for a Tony Ferguson rematch, which could be a different fight with a full camp prepping for Gaethje. But why not make this Michael Chandler’s UFC debut?

Both Gaethje and Chandler have similar paths and worked hard to get to the UFC, which makes this matchup very intriguing.

If both matches can take place in early 2021, then this would be the perfect setup for UFC International Fight Week. Yes, we are in a pandemic and still don’t know what the near future holds in terms of social distancing and allowing a full capacity of fans for events. Optimistically thinking, if this pans out in the UFC’s favor, it would be a perfect way to wrap up International Fight Week. 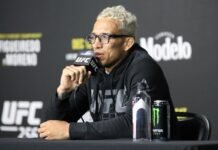