The UFC is playing hardball on the date for Conor McGregor to face Dustin Poirier.

McGregor (22-4), the biggest star in MMA history, last fought in January 2020 at UFC 246. His return to action that night remains one of the biggest cards of the year, and saw him quickly finish Donald “Cowboy” Cerrone.

Coming out of that fight, McGregor had indicated a desire to stay active. But the UFC appeared to have other plans, suggesting he fight during International Fight Week in July, as opposed to the May return date he preferred, according to texts between McGregor and Dana White that were leaked online.

Then came the coronavirus, and the UFC President’s stance was to hold off on a McGregor fight until fans were back in the building.

Of course, that could be another year away, a lifetime in terms of an athlete’s window of competition.

With all this in mind, McGregor seemed to wash his hands of the entire situation recently and proposed a charity match-up, exhibition style, between himself and Dustin Poirier. McGregor even offered up $500,000 to Poriier’s Good Fight foundation. All outside the realm of the UFC.

That led to an official offer for a fight in the octagon. Which McGregor publicly accepted. But on Wednesday, UFC President Dana White revealed that the only date he would consider for McGregor vs. Poirier 2 was in January 2021 — not November or December, which McGregor previously listed as his desired return timeframe.

Hello Dustin! I accepted the @ufc offer to fight you, but told them it must happen in 2020. I’m ready for Nov 21st, given that cards recent injury issues, as well as any of the December dates, the 12th and the 19th. I’ll also still donate the $500k to The Good Fight Foundation 🙏 https://t.co/23hN4AHtoI

Does the UFC really want to risk losing a profitable McGregor PPV over a squabble about dates? Apparently yes.

“We offered him a fight, we got him his own date,” White told official UFC broadcaster ESPN on Wednesday. “We didn’t have a date this year. We have everything laid out for this year, with world champions fighting for titles. He wants to fight Dustin Poirier apparently, so we went to ESPN and got him his own date.”

And now the ball is in McGregor’s court, apparently.

“He’s been offered Dustin Poirier on January 23. It’s a yes or no answer.” That, said White, is because the UFC has “laid out this year.” In short, that means UFC 255 — topped by both men’s and women’s flyweight title fights — and UFC 256, which features Amanda Nunes vs. Megan Anderson, and Petr Yan vs. Aljamain Sterling.

Neither of which would come close to rivaling the interest of McGregor vs. Poirier 2, of course. Which makes the promotion’s insistence on forcing their biggest star to wait all the more puzzling. Speculation has turned to the proposed boxing match between McGregor and Manny Pacquiao, or even McGregor hoping to expedite fighting out his contract.

White, however, told ESPN that he didn’t have any details on the much-talked about boxing bout between the boxing legend and McGregor.

McGregor has yet to respond to the proposed date. 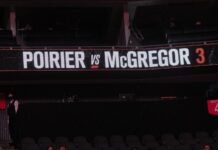 UFC 264 Aftermath: Conor McGregor’s Best Years Are Behind Him