Joanne Calderwood began her career in the UFC after competing on The Ultimate Fighter Season 20 at strawweight. This was the same TUF season that featured a lot of notable fighters like Rose Najmajunas, Angela Hill, and Carla Esparza as they battled for the inaugural UFC women’s strawweight title. At 5’6″ and a 65.5″ reach Joanne was definitely one of the longer fighters at strawweight.

Joanne fought in the first women’s flyweight bout in the UFC back in June of 2016 where she was able to TKO Valerie Letourneau.  After this bout, Joanne returned back to strawweight, losing to Jessica Andrae by submission.

Calderwood missed weight by two pounds for her next bout, against Cynthia Calvillo in July of 2017. Calderwood was fined as a result and the bout proceeded as a catchweight fight, ending in her losing a unanimous decision. At 31 years old, after that weight miss, Calderwood moved back up to 125lbs and has looked amazing ever since. Joanne is 4-1 in the weight class, only having lost to Katlyn Chookagian, a future flyweight title challenger. 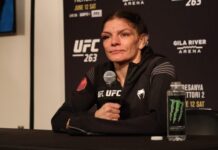 UFC 263’s Lauren Murphy: “I’m One Of The Best Fighters In The World And I’ve Been Proving It Over And Over” 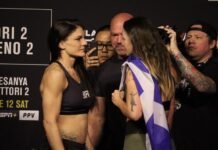 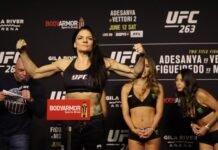 UFC 263’s Lauren Murphy: Title Shot Not Guaranteed But Would Love To Say It’s A No. 1 Contender Fight