In the first fight of the night live from the United Center in Chicago, Illinois, Katlyn Chookagian took on Joanne Calderwood in a number-one contenders match at UFC 238.

Chookagian (11-2) entered the bout with a 2-1 record at flyweight. Most recently, the Mark Henry trained Jersey-based fighter lost a split decision to UFC 238 co-main eventer Jessica Eye (who fights Valentina Shevchenko for the flyweight championship) at UFC 231. In her UFC career, Chookagian has a 4-2 record, with 50% of her UFC contests being a split decision, and 100% of them going to the scorecards.

Calderwood (13-3) entered undefeated as a flyweight – with a 3-0 record at 125-pounds in the UFC. At flyweight, she has finished both Valerie Letourneau and Kalindra Faria at UFC Fight Night 89 and UFC Fight Night 135 respectively. In her last appearance, Scotland’s Calderwood dominated Ariane Lipski, defeating the former KSW champion by unanimous decision.

A win for either lady could determine the next title-challenger at flyweight, who would face the winner of Valentina Shevchenko vs. Jessica Eye in the co-main event of the evening.

Cageside Press scored the round 10-9 Calderwood.

Cageside Press scored the round 10-9 Chookagian.

Cageside Press scored the round 10-9 Chookagian. 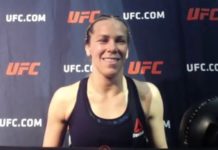 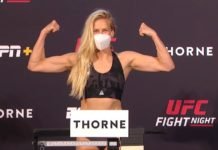