The Twitter world was set on fire once again by the Notorious Conor McGregor.

McGregor mentioned how he was against UFC 249 going forward without the fans, but would impress them even if the arena was empty. 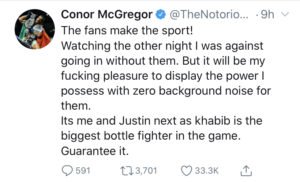 He then went on to play matchmaker, pitting his former foe Dustin Poirier against Tony Ferguson, but not before discrediting Poirier’s career. Conor continued on to show some praise for El Cucuy’s style and also referenced their time being managed by the same company. 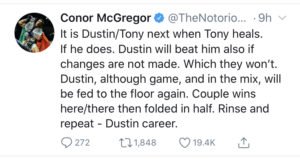 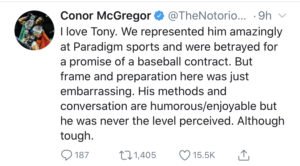 McGregor then discussed a match up with UFC 249’s main event winner, Justin Gaethje, and even called a rematch with the current lightweight champion Khabib Nurmagomedov. He seemed to get a little personal when it came time for the Khabib tweets, but that is no surprise after the melee that ensued after their UFC 229 fight on October 6, 2018. 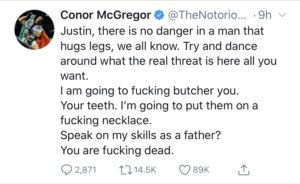 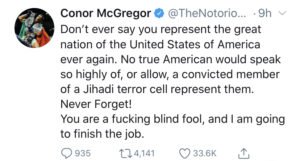 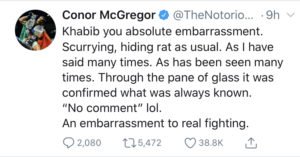 It seems that Conor plans to clear out the lightweight division with this tweet, and might have a permanent home at welterweight.

He capped off the Twitter tangent with, “See You in July”… who knows if this is true, but it could get the McGregor masses excited for a return of Mystic Mac.

One thing is for sure, Conor McGregor knows how to keep the masses entertained. Will we see any of this come to fruition? Who knows, and that unpredictability is the beauty of the sport of MMA.

When Conor returns to the Octagon, who do you feel would be best suited as an opponent? Sound off below!