McGregor vs. Cerrone prop bets have been popping up online in abundance. The prizefight goes down on January 18, 2020 and hails from T-Mobile Arena in Las Vegas, Nevada. The UFC 246 main event bout is certainly an intriguing one. The story of this welterweight bout can unfurl in several different ways. There are a couple of other prop bets but in this case the focus is on the method of victory lines.

The heavily favored outcome is obviously McGregor defeating Cerrone via some form of KO, Submission or TKO. The least likely being the bout being declared a draw. Presumably, the oddsmakers are more so leaning toward the idea that ‘Mystic Mac’ is going to score a knockout. Despite Dillon Danis’ recent comments about McGregor’s submission grappling abilities, it’s hard to see the former champ champ’s jiu-jitsu skills securing him the victory.

Conor seems to have aspirations of capturing a belt in a third division. The former featherweight and lightweight champion has been indicating in recent interviews that he’s eyeballing several fights at the upper echelon of 170lbs. Conor seems to be looking for options in multiple weight divisions by fighting at 170lbs here. A money fight with Masvidal seems to be on his mind but he also has desires to drop down and take lightweight fights with Khabib Nurmagomedov or Justin Gaethje.

Cowboy is more familiarized with the welterweight division and does have a better record than McGregor who is 1-1 in the division. Conor is looking to secure his first win in years while Cerrone looks to bounce back from some devastating defeats. How do you see McGregor vs Cerrone going down? What outcome do you see occurring in this fight (submission KO/TKO, decision, draw)? Sound off below! 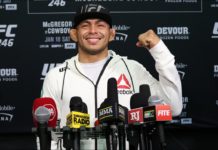