Bryan Battle was in trouble early at UFC Vegas 35, but rebounded with a second-round rear-naked choke against Gilbert Urbina to win the TUF middleweight tournament.

While the TUF 29 middleweight finale had originally been expected to feature Bryan Battle and Tresean Gore, an injury to the latter had thrown a wrench in the works. That opened the door for Gilbert Urbina, who had been defeated in the semifinals of the show — but who got the nod to face Battle on Saturday at UFC Vegas 35.

Both fighters connected with hooks right away, pushing a quick pace early on. Urbina pushed forward with a combination and rocked Battle, taking him down and peppering him with ground and pound. Battle eventually got back up and opened up on the feet, as he was landing the better shots. A big hook connected for Battle and Urbina pushed forward for a takedown against the fence. He lifted battle up but couldn’t bring him down, and Battle reversed position against the fence. Battle had the upperhand in the later part of the round.

Battle started the second round with a head kick, a combination, and a body kick. Urbina responded with a takedown attempt. He went to a back clinch instead, and when Battle reversed position, Urbina landed several elbows and shot for a takedown. Battle turned that into a takedown of his own and got the fight to the ground. Battle took the back of Urbina, got an arm around the chin and started squeezing for dear life. It was too much for Urbina, who was forced to tap. Like Kelvin Gastelum, Bryan Battle went from last pick to TUF winner.

PICKED LAST AND NOW HE IS THE ULTIMATE FIGHTER! 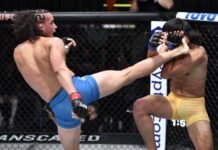