UFC lightweight veterans Al Iaquinta and Bobby Green will collide on the undercard of one of the most stacked events of the year at UFC 268.

During Saturday’s UFC Vegas 35 broadcast, the UFC announced several new bouts for the now confirmed event in Madison Square Garden on November 6.  Among them was a lightweight bout between Al Iaquinta and Bobby Green.

“Ragin”  Al Iaquinta (14-6-1) returns for the first time since October 2019 where he lost a bout to Dan Hooker.  Leading up to the bout, Iaquinta had gone 1-2 in losing fights against Khabib Nurmagomedov and Donald Cerrone with a victory over Kevin Lee sandwiched in-between.  Though Iaquinta has not been active, he is no stranger to layoffs.  With a successful career in real estate, Iaquinta has taken a voluntary hiatus from fighting in the past.  It is assumed that the opportunity to fight on a big card in his hometown of New York is the reason why he is returning at this time.  Iaquinta did have a Submission Underground match against Mike Perry in February 2020, losing the contest.

Bobby “King” Green (27-12-1) is coming off a rousing victory against Rafael Fiziev in early August where he put on one of the more memorable contests of the year, albeit in a losing effort.  A veteran of the UFC since 2013, Green has been in the cage with notable opponents such as Dustin Poirier, Edson Barboza, Josh Thompson, and Clay Guida.  The bout with Iaquinta will be his second of 2021 as February bout with Jim Miller was cancelled at the final hour.

The card is set to be headlined by a pair of championship bouts with welterweight champion Kamaru Usman taking on Colby Covington and strawweight champion Rose Namajunas taking on Zhang Weili.  It was confirmed that the event will take place in New York at Madison Square Garden. 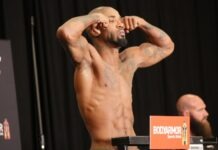 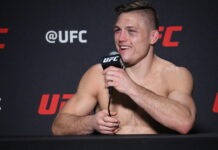