Another CFFC veteran and a product out of Tiger Schulman is Solomon Renfro. The biggest thing against Renfro in the early stages of his career was his lack of finishing ability. His first five pro fights went the distance but his last two wins, he’s finished. Renfro is coming off a recent loss last December but it was to a talented Mike Malott. Renfro earlier this month got back on the board with a win and looked better than ever. He’s very talented and still super young. He’d be just fine getting in a few more fights first but I have no doubt he would perform well in the Contender Series.

In only twelve pro fights Banks has had a solid career. He fought for TUF back in 2015 in the American Top Team vs. Blackzilians season. Even though he went 1-0 beating Sabah Homasi he didn’t get a contract. He signed with and fought for Bellator from 2016-2018 going 3-2. Following two losses he was no longer with Bellator. Banks is on a current three-fight win streak winning in the LFA, Islands Fights, and the UAE Warriors cage. Banks is UFC level and if he has to prove it through the Contender Series he could. 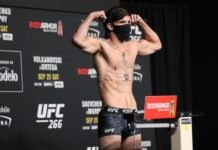