At UFC Vegas 24, Robert Whittaker put on an impressive performance in winning a dominant unanimous decision victory over Kelvin Gastelum. Andrei Arlovski also won a decision over Chase Sherman in the co-main event of the evening. Today we will be looking into what is next for the losers of UFC Vegas 24.

Robert Whittaker will likely be getting the next shot at the title against Isreal Adesanya. That leaves Marvin Vettori as the odd man out. Vettori could wait for his shot or he could take a fight with Darren Till in the meantime. If this happens, Gastelum turns into the odd man out. His best options for his next fight would be either Paulo Costa or Derek Brunson. Brunson is currently on a four-fight winning streak with his most recent win being over Kevin Holland in March. Costa has not fought since losing his title shot against Isreal Adesanya in September of 2020. Yet Costa is still ranked number two in the division and a win over him would definitely bring Gastelum right back into title contention.

After his decision loss to Andrei Arlovski this past weekend, Sherman is now 1-1 since rejoining the UFC. Sherman should be looking to fight another up and comer in his next fight. He was originally supposed to fight Parker Porter but Porter fell out of the fight about two weeks before the event. That would be a great match-up and it is very likely that it gets re-booked for Sherman’s next fight.

Abdul Razak Alhasssan lost a unamious decision to Jacob Malkoun at UFC Vegas 24. Alhassan is now 0-3 since returning from his two-year layoff. Since he did go 4-1 prior to his absence, it is possible that the UFC gives him another shot before cutting him from the promotion. Alhassan is terribly undersized for the middleweight division but if he does choose to stay at middleweight it would be great to see him take on Roman Dolidze. The striking performance we would see from both men would be incredible.

Alexander Munoz lost a decision to Luis Pena this past weekend at UFC Vegas 24. This loss makes him 0-2 in the UFC. Although those two losses were both to high-level competition in Pena and Nasrat Haqparast. For his next fight, he should fight someone who is newer to the UFC and has similar experience as himself. That man would be Ignacio Bahamondes. Bahamondes is coming off a loss in his UFC debut to John Makdessi just a few weeks ago. Bahamondes is a bigger guy for the lightweight division but that should make for a great match-up against Munoz, who is coming off a loss against the long and lanky Luis Pena. 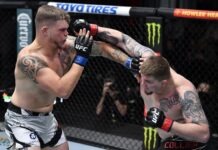