When Jared “The Mountain” Vanderaa won his contract via ground ‘n’ pound on the Contender Series, it was no surprise to those who had seen him fight in the past. The Team Quest product made a habit in his early career of getting things done on the mat with a smattering of finishes with GNP and more than a couple submissions.

However, while Harry Hunsucker was clearly at a grappling disadvantage when the two met in the Apex back in November, Vanderaa may not have the same leverage against his opponent in his UFC debut. Sergey Spivak is not only well versed on the ground, but also picked up his first UFC victory over Tai Tuivasa via arm triangle. Even given that fact, Vanderaa enters their bout this weekend confident that he isn’t going to be out paced on the mat by the Moldovan.

“Sergey [Spivak] has a very strong grappling background, but if he thinks that he’s going to come in and just out-grapple me, I don’t think that’s going to happen,” Vanderaa shared. “And I do think I actually have the better stand up than he does.”

Taking a page out of Mike Tyson’s book, Vanderaa knows that plans are all well and good until someone gets punched in the mouth. That advantage, he feels, means he’s even more likely to hold his own on the ground.

“You have to figure out the style that they like to play and then you have to formulate [a plan] to that, but, this is not just jiu jitsu or sambo, we’re punching each other too,” he said. “That would be a great equalizer.”

And although Vanderaa points out that grappling plans are only so good when there are other aspects involved, he was not shy to share a prediction on the contest.

“I’m going to do an imanari roll to heel hook. That’s my plan,” Vanderaa said with utmost confidence before adding a specific round. “I’m going to get him in the second.”

If he does so, you can count on a bonus going his way this Saturday. You can see that bout as part of the UFC Vegas 19 prelims on ESPN+.

You can listen to the entire audio of the interview at 24:20. 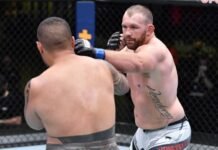