Rafael Alves will make his UFC debut this weekend against another newcomer, Pat Sabatini. It wasn’t the fight Alves expected for UFC Vegas 19, but it doesn’t seem to have changed anything for the Contender Series vet.

“I’m ready to make a big show for you guys,” he told Cageside Press during a virtual media day on Thursday to promote the Fight Night event this Saturday.

While it’s not TUF champ Mike Trizano, who was Alves’ originally scheduled opponent, it doesn’t seem to matter. “I’m ready for fight week, with everybody, everyone you want. The top ten,” Alves said via translator. “I’m ready for the beginning, or the top guys that you’ve got.”

His new opponent, Sabatini, is a former CFFC featherweight champion. “He’s a good fighter, but he’s not better than me,” Alves opined. And he believes his experience could give him an advantage this weekend.

“I feel very comfortable, because I won on Dana White’s Contender [Series],” said Alves, “and I feel comfortable here with you guys, and the UFC.”

As for how the fight plays out, “I’m a striking fighter. I feel really, really comfortable fighting on top,” said Alves. “But if you want to go down, go to the ground, I’m going to finish it.” 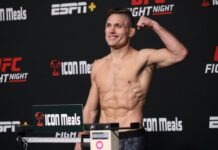 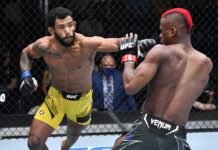 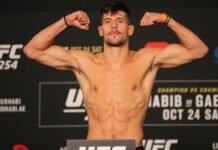