Heavyweights Jared Vanderaa and Chase Sherman were both more than likely fighting for their jobs at UFC Vegas 58 on Saturday.

Sherman had been through two stints with the UFC, and appeared to be on his way out of the promotion again earlier this year. But his willingness to fight on short notice saw him brought in to face Alexander Romanov on short notice back in April.

That said, Sherman was on a four-fight skid heading into Saturday’s fight with Vanderaa, who had lost three straight himself.

Round one showed a clear speed advantage for Sherman who used it to land combinations on Vanderaa who seemed to be content to land jabs and the occasional leg kick. He did rock Sherman near the end of the round, but Sherman continued to pepper Vanderaa with the speed.

Round two Vanderaa found his groove landing combinations ending in leg kicks. Sherman used his movement and quickness to avoid many shots, but the combinations from Vanderaa were timed well. Very competitive round, but the feeling was that Vanderaa felt he could take Sherman’s shots so he began to take more risks and landing more.

Round three and both men were in a groove, but Sherman ended up with the win by overwhelming Vanderaa with strikes. He hurt the big man and Sherman let loose finishing the fight. 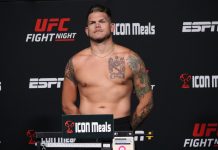