Randy Costa is out of his UFC 259 bout against Trevin Jones, and Mario Bautista is in.

Earlier this week, bantamweight Costa (6-1) announced he was injured, forcing his removal from the fight next month. Although he did not disclose the nature of the injury, Costa expects to be out for the next couple of months.

“This def isn’t the post I want to be making rn, but that’s part of the game. It initially happened ~3.5 weeks ago. I rested it and then it came back significantly worse last week leaving me with really no other option. I need to get it taken care of before it turns into something major,” Costa wrote on social media, noting he had begun physical therapy and would be “good to go for May, and I intend on fighting then.”

Costa went on to apologize to Trevin Jones, adding “I genuinely feel awful for him, but this is just an unfortunate part of the game.”

Enter Mario Bautista. First reported by MMA Junkie, Bautista will step in against Jones just over two weeks out from the fight. Bautista (8-1) has won his last two bouts after dropping his UFC debut in 2019. In fairness to Bautista, that debut came against current contender Cory Sandhagen.

Jones (12-6, 1NC) would be coming off a finish of Timur Valiev in a Comeback of the Year effort back in August. Would be, because due to a positive test for marijuana, Jones’ win was overturned to a No Contest — which doesn’t make the comeback any less impressive.

The UFC 259 card, which takes place at the UFC Apex in Las Vegas on March 6, 2021, currently breaks down as follows: 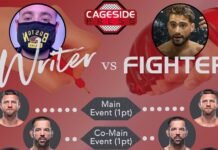 The Pro Take: Derrick Lewis’ Uppercut Draws Quite the Reaction