Murzakanov was signed to the UFC but a failed drug test before he even debuted, which resulted in his departure from the organization. He did serve his two-year ban and still came back and won the Brave CF open weight championship. Murzakanov deserves another chance after serving his suspension and making the best of it when he came back.

Russia’s Murzakanov has a background in judo, winning a handful of championships. He has solid wrestling, as he’s able to throw you to the mat or slam you down. His ground and pound is very good but his striking is excellent. He’s aggressive, always the one attacking looking for the knockout. He does have the one-punch power but is an excellent counter striker as well. 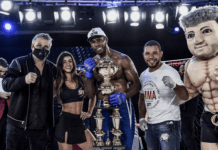