LFA and Dana White’s Contender Series (DWCS) veteran Jerome Rivera is ready to step back into the coveted octagon. And when he does, he’ll have a rather interesting opponent standing opposite him: Francisco Nazareno.

The pairing was announced a while back, after Rivera’s original opponent Ode Osborne pulled out. Since this interview took place, the UFC has announced a new home for the bout with Francisco Nazareno: on Fight Island in Abu Dhabi.

Nazareno is the brother of the man who is arguably Fighter of the Year in 2020, flyweight champion Deiveson Figuiriedo. The two train together for all camps, and this fight against Rivera will be the UFC debut for Nazareno.

“He [Francisco] has been very inactive of late,” Rivera (10-3) told Cageside Press recently. “When someone isn’t fighting, you check out what the camp is doing. He [Francisco] fights a lot like Deiveson, just less polished. I haven’t seen a lot on his grappling but I know he is a black belt,” Rivera continued. “I’m coming to break this dude, in every facet, half way through the second round I’ll be too much for this guy.”

“Against Tyson Nam, I wasn’t fighting like myself,” Rivera stated. “I fought his style of fight, I need to calm myself down next time, just focus.”

“You have to be super concentrated, know the gameplan. With Tyson Nam there wasn’t a gameplan, It was on eight days’ notice,” Rivera continued. “I went into that fight, just to fight, that was my problem.”

With all the kinks worked out, Rivera will now return to face the champion’s brother on January 20, 2021 at UFC Fight Island 8. The event is headlined by a welterweight match-up featuring Khamzat Chimaev vs. Leon Edwards. 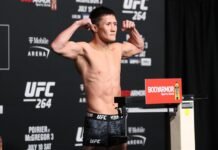 UFC 264 Results: Zhalgas Zhumagulov Taps Jerome Rivera In Round One 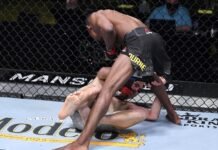 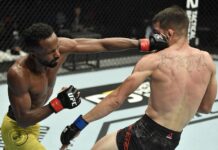