The statement that “Fighters Fight” could not be more true for Canada’s Tanner Boser (19-6-1), who is looking to make his third appearance inside the Octagon in the span of just five months. That will come on October 3 against former UFC champion Andrei Arlovski (29-19, 2NC), as reported first by TSN’s Aaron Bronsteter

It may not be the fight he has been looking for, as after each of Tanner Boser’s KO victories (over Raphael Pessoa and Philipe Lins Tanner) he took to the headset to call out Maurice Greene. But the silver lining of not getting that match-up is that he now has the opportunity to step inside the Octagon and capitalize on a big name like Arlovski, and use that as a driving force to leave the rest of the weight class behind and propel himself into the upper echelon of the heavyweight division.

For Andrei Arlovski, if he happened to get a victory over a top prospect like Boser he could be back in talks for one last run at the heavyweight title. Many might see that as a long shot with the talent that encompasses the top of the division, but Arlovski always seems to be a wild card and like any gritty veteran finds the most prime time to win when his back is against the wall.

The location of the UFC’s October 3 event has yet to be determined. But no matter where these two heavyweights clash it is bound to be an entertaining fight, adding to a fight card that is beginning to take shape with another bout announced to be in the works for October 3 between Germaine de Randamie and Julianna Pena.

Who do you see walking out with the victory between Tanner Boser and Andrei Arlovski? Let us know in the comments below! 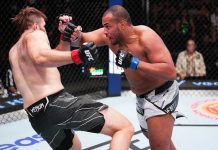