Welterweight, Roberto Soldic (17-3): Roberto Soldic has always been an exciting fighter to watch, but his work in KSW has really forced a lot of fight fans, pundits and (hopefully) promotions to pay close attention to him. Since his arrival in the promotion, Soldic has been involved in several action-packed fights against the likes of Borys Mańkowski, Dricus du Plessis and Krystian Kaszubowski, all of which have ended by way of knockout. In a Soldic fight, you can expect him to come forward and throw heavy, calculated shots until his opponent is hurt. Add on to that his developing ground game now that he has spent some time training under the tutelage of Firas Zahabi over at Tristar and Soldic is steadily becoming even more of a problem at welterweight. Soldic has spoken about signing to the UFC in the past and he is confident in his ability to handle some of the big names the promotion has to offer, and I am just as confident. Signing Soldic would be an excellent move by the UFC, so let us hope they add yet another promising prospect to their already stacked welterweight division.

Heavyweight, Mohammed Usman (6-1): Mohammed Usman is the younger brother of UFC welterweight champion Kamaru Usman, and while this may be used as a reason to sign him to the promotion, it should not be the only one. Plain and simple, the talent of Usman is what should lead him to the grandest stage in all of mixed martial arts. It is true that he is still developing as a fighter, having a professional record of 6-1 at the moment, but what he has done inside of the cage is nothing short of impressive. He primarily relies on his wrestling, which has been an absolute nightmare for his opponents, but his striking is getting better every time he makes an appearance. In his last two fights under the Titan FC banner, Usman has earned first-round knockouts inside of 2 minutes. Usman was poised to take his career to the next level after signing to the Professional Fighters League (PFL) earlier this year, but with the season being canceled, I think we were all left wondering what will come next for him. Seeing what he has been able to accomplish in such a short amount of time, Usman would certainly be a welcome addition to the heavyweight division of the UFC.

Lightweight, Natan Schulte (20-3-1): Natan Schulte is one of the best lightweights in the world not signed to the UFC and that needs to change. Schulte has made quite the name for himself after becoming a two-time season winner in the Professional Fighters League (PFL) in 2018 and 2019 respectively and was probably on his way to another win before the upcoming season was canceled. Schulte is well-known for his work on the ground, which is a solid mix of Brazilian jiu-jitsu and wrestling, and it often leads him to either a submission or dominant decision. From what we have seen in the performances of Schulte, I think it is fair to say that he would be a perfect fit in the UFC’s lightweight division. He has faced some tough names in the PFL, but now is the time to take a step up in competition and see how well he can fare against a new set of opponents.

Strawweight, Luana Pinheiro (7-1): The strawweight division is always in need of some fresh talent and that is where Brazilian standout Luana Pinheiro comes in. Her professional career is only a few years old, but Pinheiro has long been a part of the mixed martial arts community as she began training in Judo at a very early age. Since then, she has transitioned into a full-time fighter and has been doing some great work over at Brave CF after signing with the promotion back in 2018. Pinheiro is obviously well-versed on the ground due to her Judo background and Brazilian jiu-jitsu, but she has also shown she can strike as well. In her most recent fight, Pinheiro knocked out Helen Harper at Brave CF 29, which marked the first time in her career that she has scored a win in that manner. Pinheiro has proven that she has what it takes to be a complete fighter, so as long as she continues to have showings like this, it will be a matter of time before the UFC makes the decision to snatch her up.

Bantamweight, Lisa Verzosa (5-1): The UFC has been signing plenty of talent from Invicta FC in the last several weeks, so I have to imagine that the promotion has its eyes on someone like Lisa Verzosa. She has a strong wrestling background but can also stand with her opponent if necessary, as was very apparent in her last outing. She came up short and suffered her first professional defeat in a fight against Julija Stoliarenko, but Verzosa still showed why she is one of the best at 135 pounds. Verzosa has set a goal of signing to the UFC by the end of 2020 and I think it is totally plausible considering what she can bring to the bantamweight division. 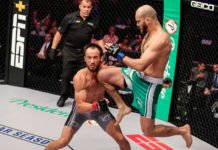 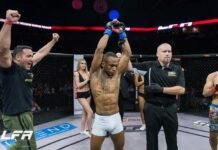