Jorge Masvidal is set to take on Kamaru Usman for the welterweight title at UFC 251 next Saturday on Fight Island.

Just 48 hours after it seemed that the UFC’s highly anticipated first Fight Island event had lost its headliner, a welterweight title fight has been made. The promotion has come to terms with surging contender Jorge Masvidal to step in on a week’s notice to face welterweight champion Kamaru Usman in the main event of UFC 251 this Saturday.  Both sides are done in terms of negotiations and the fight is a go should the two continue to pass all medical testing.  The news was first confirmed via Ariel Helwani on Sunday morning.

Negotiations for Usman vs. Masvidal are done, per sources. All sides agreed to terms. Usman is en route to LV; Masvidal landed earlier. Once at the hotel, they’ll have to take a COVID test and then quarantine while awaiting results. If negative, they’ll fly to AD likely tomorrow.

When the news broke on Friday night that Gilbert Burns had been pulled from the event after testing positive for COVID-19, the original report was that the bout with Usman would be rescheduled for a later date.  As the situation developed on Saturday, reports came that top contender Jorge Masvidal was in discussions to possibly step into the bout.  A video of Masvidal being tested for COVID-19 in Miami began to make the rounds on social media later that afternoon.

As of this writing, the plan is to move forward with both Usman and Masvidal making their way to Abu Dhabi’s Yas Island where the UFC has closed off a ten mile area to hold the event.  It should be noted, the flight itself will take up to 15 hours and that both athletes are expected to follow the same testing and isolation protocols as the other athletes leading up to the event.  While this figures to be an arduous fight week, it figures to be particularly taxing for Masvidal who must still make the championship weight of exactly 170 pounds on Friday morning (local time) with critical time being spent on a plane or isolated in his hotel room.

In a twist of irony, the UFC’s original plan was to go with Masvidal for the next shot at Usman but the two sides were unable to come to an agreement and the promotion ultimately went with Burns for the fight.  Masvidal is coming off a career-defining victory over Nate Diaz last November while Usman is coming off the first defense of his world title against Colby Covington in December. 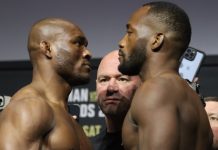