There’s a lot of talent looking to make it big in MMA — but who should the UFC call on before the year is done?

In this feature, we take six journalists including our own Shawn Bitter, plus four hardcore MMA fans/Podcasters to get their take on who the UFC should sign by year’s end. So far this year, the UFC has signed major prospects like Jiri Prochazka, Shavkat Rakhmonov, Roman Bogatov, Umar Nurmagomedov, Jai Herbert, Manel Kape, Modestas Bukauskas, Nate Landwehr and more. Here, each member of our panel will give their picks on who they think the UFC should sign by the end of 2020.

Middleweight, Roberto Soldic (17-3): Soldic has beaten some stiff competition in his career including Lewis Long (16-5), Borys Mańkowski (19-7-1), and Dricus Du Plessis (12-2), winning five titles including the KSW middleweight title. Soldic is easily one of the best welterweights on the global scene and the UFC would be very wise to try and pry him from KSW. Soldic is always coming forward and always looking for the finish in a controlled chaos manner. KSW has had talent that went to the UFC like Jan Błachowicz, Karolina Kowalkiewicz, Aleksei Oleinik, and others.

Featherweight, Igeu Kabesa (12-1): Kabesa’s only loss is to UFC fighter Danny Henry, which was a rematch of their first meeting, which Kabesa won. Of the two, Kabesa has a much higher ceiling. “Smiley” is one of the two best prospects out of South Africa along with Demarte Pena. He is the current EFC Worldwide featherweight champion and on a four-fight win streak. Kabesa is a very decorated wrestler being a 10-time Wrestling Nationals Champion. He is young and solid everywhere. Kabesa has amazing wrestling and grappling, he can move well on the mat and can reach mount fairly easy. His striking is good too, moving in-and-out with explosive punches quickly and his slips and counters are solid.

Featherweight, Joanderson Brito (11-2-1): Brito has been on a roll since his last loss in 2015, going 10-0-1 in his last eleven fights. He’s fought for the likes of Future FC and Thunder Fight which are two top promotions out of Brazil. He’s also the former Fusion FC champ, a promotion based in Peru. In his most recent fight, he made his U.S. debut for LFA and beat a top prospect in Jose Mariscal. Brito is a bull walking his foes down and throwing huge looping hooks with big power. He’s a power striker on the feet but has some good wrestling and better top position to fall back on. He’s arguably the best prospect right now out of Brazil.

Featherweight, Salahdine Parnasse (14-0-1): Parnasse in my opinion is the best prospect worldwide. Parnasse didn’t really become noticeable until he signed with one of the biggest European organizations in KSW in late 2017.  In April of last year, Parnasse beat Roman Szymański to become the interim KSW featherweight champion. Last December he beat the well-known Ivan Buchinger to retain his interim title. Parnasse would prefer to keep the fight on the feet where he can use his effective movement and a good kickboxing base. This would be one of the biggest if not the biggest signing if somehow the UFC could snatch him up.

Strawweight, Melissa Martinez (7-0): Martinez is currently signed with Combate Americas and is their current 115-pound champion. Recently, Combate champion Gustavo Lopez was able to be released from his contract. Rafa Garcia who is also a champion there has vacated his contract to sign to another promotion. So there is hope for the UFC picking up Martinez. “Super Melly” has the ability to break an opponent down with her chopping leg kicks. She also displays a quick release with her dangerous head kick that she has won a couple of times with. She looks really promising at such a young age and so early in her career. 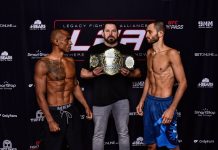 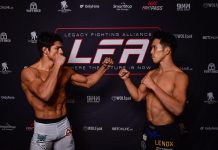