The UFC’s fight card on August 22 has added another quality fight with the announcement of Angela Hill vs. Michelle Waterson, taking place inside the UFC Apex in Las Vegas, Nevada.

Hill is looking to get back on the winning track with a victory over a fellow Invicta alumni in Waterson. That’s after her three-fight win streak was broken by Claudia Gadelha in a controversial loss at UFC on ESPN 8 back in May.

Never one to shy away from a fight, Michelle Waterson isn’t looking for an easy one in her return to the Octagon, and it shows with accepting a tough competitor in the ever-improving Angela Hill. A win over Hill could be the right one that propels Waterson back into the discussion of being in the ranks of title contenders, as she has been on a bit of a losing skid after two losses to former UFC champions Carla Esparza and Joanna Jędrzejczyk.

Stylistically, this is an exciting match-up that we are spoiled with as the women join an already interesting fight card. Both women’s gritty style could bring in Fight of the Night honours, as they know that another potential loss on their resume might be an unwanted setback in an ever-growing women’s strawweight division.

Check out the already exciting line up that the Hill vs. Waterson has been added to.

Who is your favourite to win this intense strawweight bout between Michelle Waterson and Angela Hill? Sound off below! 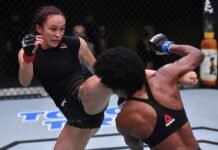