Cody Stamann got an emotional, much-needed win against Brian Kelleher at UFC 250.

A pair of bantamweights were fighting up a division at UFC 250. Brian Kelleher was making a quick turnaround, after earning his second straight win at UFC Jacksonville. That victory against Hunter Azure landed him a scrap with Cody Stamann, who was coming off a frustrating draw last December in a fight with Song Yadong.

There was another story line ahead of the fight as well. Cody’s brother, Jacob Stamann, had passed away shortly before the fight. Many would have dropped out, but Cody Stamann chose to fight on.

The bantamweights opened fire quickly, with Kelleher landing a combination followed by a head kick. Stamann landed a combination of his own right after. Kelleher landed a nice calf kick, and Stamann countered with a quick right that landed. Stamann started to get into a rhythm and started to pressure Kelleher up to the fence. Stamann landed a head kick, then landed a left hand. Stamann got Kelleher to the ground briefly and landed a left hand again, but Kelleher got back to his feet quickly and connected with a left hook. Stamann had great head movement in the first and dodged a Kelleher combination that sent us to round two.

In the second, Cody Stamann landed a clean right hand, then Kelleher shot in on a takedown up against the fence. Stamann stuffed the shot and went right back on the offense. Kelleher tried to advance and ate a jab followed by a left hook. Stamann shot in with a combination, ripping to the body and landing a right hand. Kelleher landed a combination upstairs that got Stamann’s attention, and Stamann shot back with a left hand of his own. Kelleher stepped in with a nice elbow, but Stamann would get a big takedown with about 90 seconds remaining. Stamann landed in full guard and looked to posture up and land ground and pound. Kelleher got back up to his feet, but Stamann stayed on him and didn’t leave the clinch. They would separate and end the second round with the two of them trading spinning kicks.

Stamann got the fight to the ground briefly during the beginning of round three, but Kelleher would quickly get back to his feet. Stamann was landing jabs at will, and any time Kelleher tried to advance on Stamann, he would get hit. Kelleher landed two straight right hands and seemed to start pressuring Stamann. Kelleher would land a left, and look for a kick that would be caught by Stamann. Kelleher landed a big combination punctuated by a right to the body, and Stamann looked to circle off the cage. Kelleher would land a nice combination then look for a takedown in the final seconds. He would get the takedown, and end the fight on top to send us to the judges’ scorecards.

In the end, Stamann pulled out the win on all three cards. A huge, and very emotional, victory. 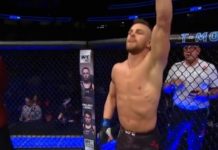