Contender Series veteran, and owner of one of the best nicknames in fighting, “Coconut Bombz” Maki Pitolo was back in action at UFC 250. Pitolo would be making his second trip to the octagon, hoping to see his hand raised after losing a decision in his debut at UFC 243 last year.

A veteran of Contender Series season one, Charles Byrd, was his scheduled opponent in Las Vegas. Byrd had won his own debut in 2018, but had dropped both of his appearances since, to some tough competition in Darren Stewart and Edmen Shahbazyan.

Both men meet in the centre of the Octagon with a touch of the gloves to get the fight started. After a quick striking exchange Byrd took the fight to the cage with the clinch. Pitolo managed to get control and took the fight to the ground; after a quick scramble Pitolo almost had Byrd’s back, but Byrd reversed it. A guillotine attempt followed from Byrd, which Pitolo exploded out of to take Byrd down with a double leg. Byrd managed to get back up and scored a takedown of his own before the round ended with them both on the ground scrambling for position.

Round two opened up with big strikes being thrown from both men. Pitolo took advantage of the big bombs that were thrown by Byrd and began to find the target with a straight left which wobbled Byrd. Pitolo continued with body shots and well-placed elbows before taking Byrd to the ground, where he finished the fight with hammer fists before Herb Dean steps in.

🥥 @Coconut_Bombz with the finish in RD 2! 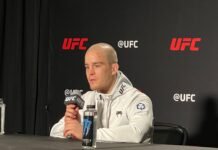 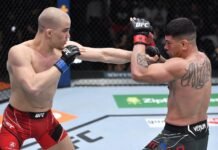 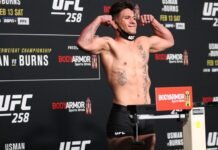