Earning a shot in the semifinals, Akhmet Aliev was a step ahead childhood pal Rashid Magomedov at PFL 8 2019 on Thursday.

Natan Schulte, last year’s lightweight champ, would have a keen eye on this fight, as the winner would face him in the semifinals later in the evening.

A spinning back kick from Aliev was the first real action in the opening round, landing, but not clean, about a minute in. They’d exchange several times after that, the fight staying on the feet through the first half of the round. Magomedov would employ a high kick, and an uppercut. Aliev would counter with uppercuts, and towards the latter part of the round, would fire a spinning kick of his own. He’d also land a huge suplex in the final minute, but Magomedov popped right back up! Aliev, however, would complete one more takedown to finish the round.

The second saw Magomedov pressing the action, looking to bounce back from a tough end to the first frame. However, Aliev began tagging the body, hard shots that his opponent could not avoid. Too many of those, and Magomedov would be slowed, or worse. Aliev continued to mix up his combos, going to the head, body, and adding kicks. He also caught a kick, but was unable to dump Magomedov on his back. Magomedov would continue to employ his front kick despite this close call; a spinning kick from Aliev mid-combination would close out the round.

If there was one takeaway in the second, it was that Aliev had not slowed down at all. Having gone the distance in the two-round quarterfinal fight, the winner was no surprise, as Akhmet Aliev earned the unanimous decision. 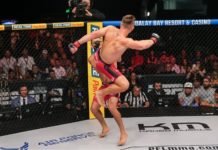