The second post-season event of the Professional Fighters League 2019 season, PFL 8, saw lightweights and featherweights throw down, with a spot in the finals on the iine.

PFL 8 2019 saw history repeat itself, to an extent. Natan Schulte is once again in the finals at lightweight. So too is Lance Palmer, at featherweight. Both men won the million dollar tournament in 2018, and both men have the chance to become multi-millionaires with another win come New Year’s Eve, when the finals go down in New York City.

Facing Schulte will be little-known Loik Radzhabov, while Daniel Pineda will take on Palmer.

If you missed the event, check out full results and photo highlights below! 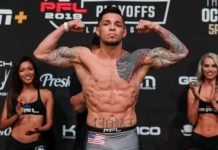