Kyle Prepolec plans on bringing Khabib-like pressure in his sophomore trip to the octagon at UFC Vancouver against Austin Hubbard.

Windsor, Ontario’s Kyle Prepolec returns to the octagon this Saturday at UFC Vancouver, and when he does, he’ll be back at his natural weight class. Prepolec (12-6) will be in his sophomore outing with the UFC, after his first fight followed the blueprint that so many athletes take to get to MMA’s biggest stage: the Canadian stepped up as a short-notice replacement.

Prepolec took a fight against fellow Canadian Nordine Taleb at UFC Ottawa back in May. Not only was the bout short notice, it was up at welterweight, a tad higher than the waters Prepolec usually swims.

While the bout didn’t go his way, Prepolec went the distance with the veteran Taleb, and told Cageside Press ahead of UFC Vancouver that if nothing else, the fight showed him that he’s “ready for the level of competition in the UFC.” The way Prepolec looks at it, he added, “is an optimistic and positive look.”

“It definitely helped me to grow, just to see what I did in that fight, and what I should have worked on before,” he told us, barely a week out from the Vancouver card. “Now I’ll be able to showcase that in this fight coming up.”

Fighters are generally their own worst critics. Among areas Prepolec found room for improvement was volume. “I wasn’t throwing enough,” he admitted. Another factor, he allowed Taleb to throw first. “I was letting him go, then I would go,” he said. That is something he’s worked to correct. “I’m not giving any breathing room for pretty much anyone. Just totally trying to go go go, and attack. Be relentless. Be a nasty striker and be relentless. Like Khabib with the pressure.”

Prepolec wasn’t about to make any excuses for the loss, but he does admit that 155lbs is where he’ll be at for the foreseeable future. “Lightweight is where I feel like I do best. I feel it’s more of my natural weight class, where I feel better for everything. And there won’t be so much of a size different. It’ll be more of an equal playing ground.”

The cut to 155lbs isn’t bad either. Six to eight pounds, said Prepolec, who wants to ensure he stays healthy and cuts weight properly. “If I have to do 10, I can shed 10 no problem.”

The Resurgence of Ontario MMA

Prepolec entered the UFC off a couple of wins in BTC, an upstart Ontario-based promotion that has breathed a much-needed infusion of life into the sport in the province. Prior to BTC’s emergence, the MMA scene had grown stagnant, at best.

Reflecting on his pre-UFC bouts, Prepolec feels that his BTC 5 fight against UFC vet Cody Pfister in particular helped ready him for the big stage. “I think it definitely prepared me really well. Cody had relentless pressure. It wasn’t anything crazy, but just the way I was able to adapt to someone who is such a veteran of the sport. He was on a three-fight win streak, and he’s beaten guys, finishing guys, grinding out guys.”

“He came to fight me, it was a privilege really,” Prepolec recalled. “I don’t want to say stepping stone, but it helped me get that jump to get to where I am now. So if it wasn’t for BTC and Cody Pfister, and obviously my team and everyone that helped me get ready for pretty much anything and anyone, I probably wouldn’t be here right now.”

The resurgence of MMA in Ontario should help more fighters like Prepolec make their way to the UFC and other top promotions. After a boom shortly after the province legalized the sport in 2010, MMA slowly went into decline. The Score Fighting Series, one of the key players in the province, closed up shop. Shows were few and far between. The rising cost of putting on events in the province was a key factor.

Thankfully, BTC is picking up the slack. “I think it’s a lot better just for the Province of Ontario. For a while, it was just fights here and there once in a while,” said Prepolec. “I’m always trying to get at least three fights [in a year], and then recoup, be healthy, don’t take too much damage, inside and outside of the gym. But now it’s booming. We’ve got BTC, where they’re having four to like seven events a year in different areas of Ontario. And now there’s PFC [Prospect Fighting Championships], and then there’s other leagues that are starting to boom all over Canada.”

For Prepolec, all this shows “the next level of the sport, how it’s growing and evolving.” Something that will be a boon for the next generation of MMA athletes.

As for his own beginnings in MMA, Prepolec had a few local heroes to look up to. “Of course there’s always Sam Stout, Mark Hominick, Chris Horodecki.” Prepolec’s fandom didn’t stop at just the local scene, however.

“I was always a big fan of Mirko Cro-Cop. Matt Hughes. Georges St. Pierre of course. I liked the Miletich guys as well back in the day,” he said. “Just growing up watching it a lot, obviously all the old school guys as well.”

The local guys who Prepolec looked up to, and even got to meet and train with, showed  Prepolec that his dreams could be achieved, however. “We are all humans. They’re just like us. They’re good, honest, hard-working people,” he observed. “They did everything they could to get there, it’s just all about how much are you willing to work for it. You work hard enough, you do well, you’ll get the call. It made my dream come true, so I know it can work for everybody else too.”

Early-career bouts against Kevin Lee and Alex Ricci, future UFC athletes, also showed he was headed in the right direction. While those fights didn’t go his way, “I was just early in the process,” said Prepolec. “They caught me early. Now I’ve grown and become a better athlete and martial artist. Now it’s my time to prove I belong there, and that I should stay there. That’s my goal, I want that longevity and obviously I want to obtain the belt, but I want to work my way up. I want to do it properly.”

Prior to this week, Kyle Prepolec had never made the trek out to B.C. He’s made it as far west as Alberta, but this will be his first trip out to Vancouver. When he arrives, after all the fight week obligations, weight cut, and weigh-ins are done, he’ll be meeting Austin Hubbard at UFC Vancouver.

Hubbard is a veteran of LFA, who like Prepolec dropped his first UFC fight. “Stylistically, I think it’s a great match-up not only for the fans, but him and myself. We both like to throw down, we’re both evolved enough in this sport that we’re good everywhere,” Prepolec said of the match-up.

It all comes down to “who’s going to win that chess battle,” he suggested.

Later, Prepolec proclaimed himself ready no matter where the fight ends up. “Where ever it goes pretty much, I feel like I can take control and do my thing. If everything goes well, obviously a first round finish would be perfect,” he said. But the Windsor-based fighter recognizes any number of possibilities could play out. “I have all the scenarios in my head, how it could go. It could go late in the first or second rounds, TKO finish. Or just heavy, exciting Fight of the Night style, decision win.”

Having all the scenarios in his head is how Prepolec approaches his fights in general. “I know where my skill set is for my wrestling, my jiu-jitsu, my striking,” he said. “Pretty much where ever the fight can go, it can be finished.”

So where ever the fight gets taken, “I’m always looking, whether it’s on the ground, to ground n’ pound or to submit, or just stand-up striking, to just pick apart, and let the KO come.” His coaches, mind you, do the game planning. “They do all that. I just work, I train, I do my thing. They’ll give me the key advice and they’ll just coach me and get me prepared as much as possible.”

“It’s pretty wild just to be able to share the cage with all these legends.”

Prepolec trains under Rino Belcastro at Windsor’s Maximum Training Centre, and has been working with a host of names, including Daron Cruickshank, TJ Laramie, Shane Monaghan, and Bobby Nash. The mixture is made up of MTC fighters, plus athletes from nearby Michigan Top Team. Solid company.

Aside from his own fight, there’s another big lightweight scrap at UFC Vancouver: the can’t-miss main event featuring Cowboy Cerrone and Justin Gaethje.

“It’s pretty wild just to be able to share the cage with all these legends,” said Prepolec. “It’s like man, this is so cool. I’m on a Cowboy card again. Last time out it was with Cowboy and Al Iaquinta [at UFC Ottawa]. So I was like ‘oh man, I get to see this guy again? This is crazy!'”

Rest assured, Prepolec, like everyone else, will be sticking around to see the main event. First, however, he has his own business to take care of, with Austin Hubbard.

UFC Vancouver (UFC Fight Night 158) takes place Saturday, September 14 at the Rogers Arena in Vancouver, B.C. The card airs live on ESPN+ in the U.S., and on TSN 4 in Canada. 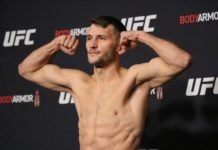 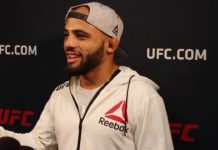