The UFC has done a little spring cleaning, although it’s likely their timing will be questioned. Among a list of fighters apparently let go by the promotion are Kyle Prepolec, Tonya Evinger, and a host of others.

The UFC has not confirmed any of the changes. However, Prepolec confirmed his release on Thursday. “Was fun while it lasted once everything is done and settled I’ll get the ball rolling and get back in there,” he wrote on Twitter. “Thank you [UFC and UFC Canada] for the opportunity. I’ll prove myself worthy again. Time to get back to work. Time to be better then ever before.”

Lightweight Prepolec (12-7), a former BTC standout, joined the UFC off the strength of wins over Scott Hudson and former UFC fighter Cody Pfister. However, he stumbled out of the gate, going 0-2 inside the octagon, with losses to Nordine Taleb (who has also moved on from the promotion) at 170lbs, and Austin Hubbard at 155lbs.

Tonya Evinger (19-8, 1NC) entered the UFC as an opponent for Cris Cyborg, during Cyborg’s featherweight title reign. A former Invicta FC bantamweight champ, Evinger lost to Cyborg (as most do), then came up short against Aspen Ladd and Lina Lansberg. Both fights were definitive losses.

Among some of the most surprising names listed as removed from the roster, Mairbek Taisumov, who was 6-1 in his last seven fights. While coming off a loss to Carlos Diego Ferreira at UFC 242, it seemed as if he had plenty of fight left in him. A failed USADA test earlier in 2019 and struggles to obtain a visa to compete in the U.S. may have come into play. The lightweight, however, won three consecutive Performance of the Night bonuses from 2015 to 2017. Update: per an MMA Junkie report, Taisumov has confirmed his contract has expired, and he is a free agent fielding offers elsewhere — but is open to re-signing with the UFC. 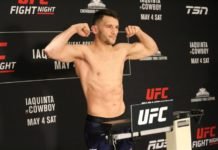 UFC Vancouver: Kyle Prepolec Wants to be “Like Khabib with the Pressure” 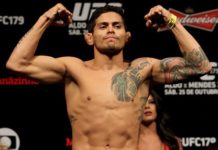