Miles Johns always dreamed of having his UFC debut in hostile territory, and got his wish at UFC Vancouver.

When the dust settled, Johns had his perfect record intact. Improving to 10-0 off a close split decision.

The size difference was a new experience for Johns. “I haven’t fought somebody that tall before, and his legs were a lot longer in the cage than I even imagined outside of it. He was real heavy when he was hanging on me in the cage, trying to get the underhooks and stuff.”

Summing it up, Johns said his opponent “was a big tough grimey dude. It was a learning experience for sure.”

The win, of course, “feels great. I’m so grateful for my team and my coaches. And I’m so grateful for that long journey. I think that third round, being able to pull it out and take that fight away from him in the third round has a lot to do with my come up through LFA, the Contender Series, and just my coaches and team at Fortis MMA, my strength and conditioning coach Mike [Scaccia], without those guys I wouldn’t have that extra push to take that round.”

Asked about the famed octagon jitters by Cageside Press Johns said that he didn’t feel them, “but the crowd was even a little more than I thought. I was looking forward to that, and that brings excitement and sets the stage kind of.”

Hearing the crowd screaming that Cole was going to kick his butt “was just kind of a surreal feeling. That’s competition, that’s what I love, I love competing at the highest levels.”

Though Johns wants to fight back home next time, he said “I was happy to have my UFC debut in enemy territory. It was kind of like when I used to think about it years ago, it’s kind of how I pictured it, having to go to Brazil or something and fight some crazy Brazilian in their back yard. It gave me that feel.” 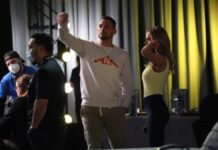 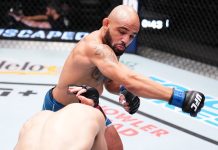 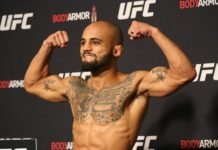