Bellator MMA continues to draw in athletes from other disciplines, as BJJ ace A.J. Agazarm returns, and boxer Ava Knight debuts at Bellator 228.

Bellator MMA continues to sign some interesting talents from the boxing world. The promotion, who inked Heather Hardy to a deal a few years ago, has now signed the “Lady of Boxing” Ava Knight to a deal. Knight, a former WBC and IBF boxing champion, will make her debut at Bellator 228 in September. The Chico Enterprise-Record was first to report news of the signing. Knight is expected to face Shannon Goughary in her promotional debut. But that’s not the only addition to Bellator 228, as BJJ ace A.J. Agazarm will continue his MMA journey.

Azagarm (1-1) will take on Jonathan Quiroz at the event. The submission expert lost a split decision in his debut at Bellator 214, but will enter his third fight off a win against Jacob Landin at Bellator 224. Not surprisingly, a rear-naked choke submission.

Quiroz (3-3) will be making his Bellator MMA debut in the fight.

Knight, meanwhile, will be making her MMA debut period at the event. She sports a boxing record of 18-2-5. Opponent Goughary is 3-3 as a pro, but is coming off a loss at Peak Fighting 2 last month.

Bellator 228 takes place September 28 at The Forum in Inglewood, CA. Patricio Freire defends his featherweight title against Juan Archuleta in the main event. The fight serves as part of the Bellator Featherweight Grand Prix. 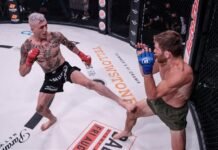 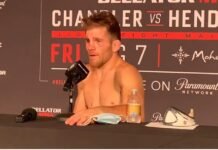