Taking the spotlight in this week’s MMA prospect report is PFL and Invicta FC alone.

Goltsov has beaten a string of well-known fighters in James McSweeney, Jared Rosholt, Chase Gormley, Peter Graham, Brett Rogers, Konstantin Erokhin, Mike Kyle, and Paul Buentello. He is good everywhere and dominates fights. Goltsov has the laid-back style where he can work a precise and impactful jab for as long as he pleases, but then he can switch it up and launch a head kick out of nowhere. Goltsov is a multiple-time Combat Sambo champion and placed first at this year’s Euros. Goltsov is the finished product and is only getting better and better. He’s arguably the best heavyweight prospect out there. He fights Kelvin Tiller (11-2), who is a good prospect coming off a win.

He is a relative of UFC lightweight champ Khabib Nurmagomedov and fights very similarly to him. He has excellent wrestling and great top control with constant ground-and-pound and excellent cardio. He is not as good as Khabib yet but he does have very good kickboxing, something Khabib lacks. He has speed behind his kicks, not exactly power, but it provides a problem for his opponents as he throws a lot as well. Umar is getting better and better in each fight. He fights Sidemar Honorio (13-6).

VanZandt is a solid prospect and one of the best atomweight prospects today. On the feet, VanZandt is always throwing good combinations and throws good leg kicks. She relies on her volume on the feet and excels mixing it up. The 25-year-old is an even better wrestler and on the mat is where she is best. VanZandt has effective ground-and-pound and is really good with transitions and taking the back. She’s really good and someone I would rate high-level. She fights Jéssica Delboni (8-1), who is a good test.

“Hold Fast” is a promising prospect out of Oklahoma but born in Hawaii. Geltmacher is a four-time All-American wrestler. She has had trouble getting takedowns in the past but is getting better with each bout. It’s the work she does on top with her relentless ground-and-pound that makes her so good. Geltmacher has lately spent time on the feet and as she’s still green she has good movement moving in and out and is technical. She fights Victoria Leonardo (5-1).

Leonardo just made her professional MMA debut a little over a year ago and in her debut beat Hailey Cowan who is a top prospect right now. Leonardo is an aggressive fighter who will immediately push her opponent to the cage. She is strong in the clinch and has good dirty boxing, but the plan is to get the fight on the mat. Leonardo is good once on top as she passes guard well and is good at creating opportunities when her opponent moves. Her wrestling could be better, but her pressure breaks wills. She fights Stephanie Geltmacher (4-0). 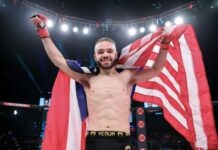