Former UFC middleweight title challenger Yushin Okami hit a wall in the form of Kiamrian Abbasov at ONE Championship: For Honor on Friday, falling via TKO in the second round.

The ONE Championship debut of former UFC star Yushin Okami did not go according to plan. Friday in Jakarta, Indonesia at For Honor, Okami stepped into the ONE ring with Kyrgyzstan’s Kiamrian Abbasov. Okami was coming off his latest stint in the UFC, having gone 1-2. Now, he finds himself on a two-fight losing streak, after Abbasov scored a second-round TKO over the Japanese veteran.

The loss continues the struggles of UFC transplants joining ONE, after Eddie Alvarez was knocked out at A New Era in March. Sage Northcutt will be the next UFC alum tested, later this month.

The fall of Okami wasn’t the only upset at ONE Championship: For Honor on Friday however. In the main event, Jonathan Haggerty battled defending flyweight Muay Thai champ Sam-A Gaiyanghadao to a unanimous decision victory, claiming the title in the process.

Check out the photo gallery below for highlights from all of the action at ONE Championship: For Honor. The promotion returns on May 10 with Warriors of Light, live from Bangkok, Thailand. 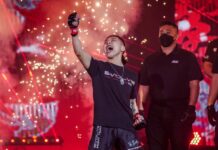 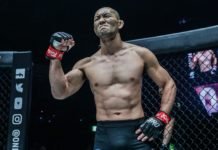 Yushin Okami Gets Back in the Win Column at ONE: Century Part I